SS Panthers take the Northern Bridge without contest.  The HQ Panther can bee seen parked right on the actual crossing. 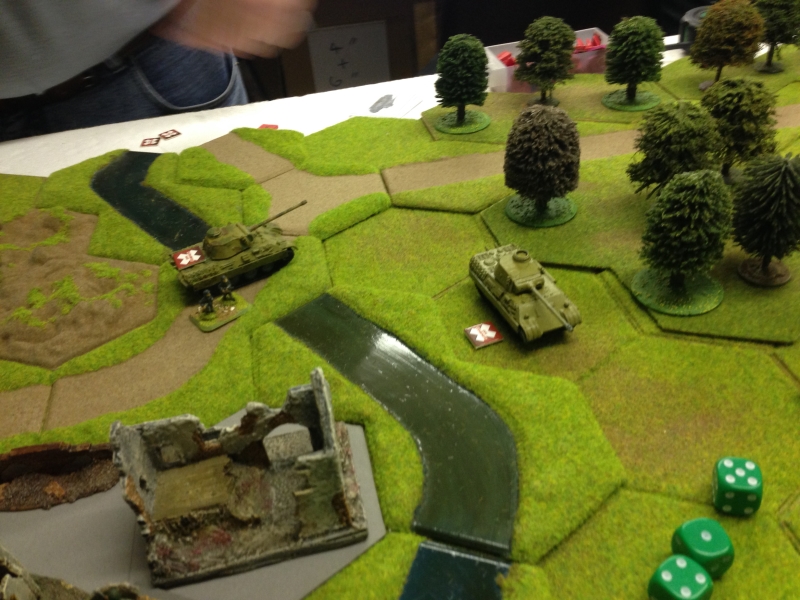 The Panthers are joined by a Recce ‘Puma’ armoured car, who is moving out to the east of the town to try to call in Air strikes against any Russians he can see. A third Panther Platoon pushes on towards the southern river crossing.  The town is nearly surrounded now. 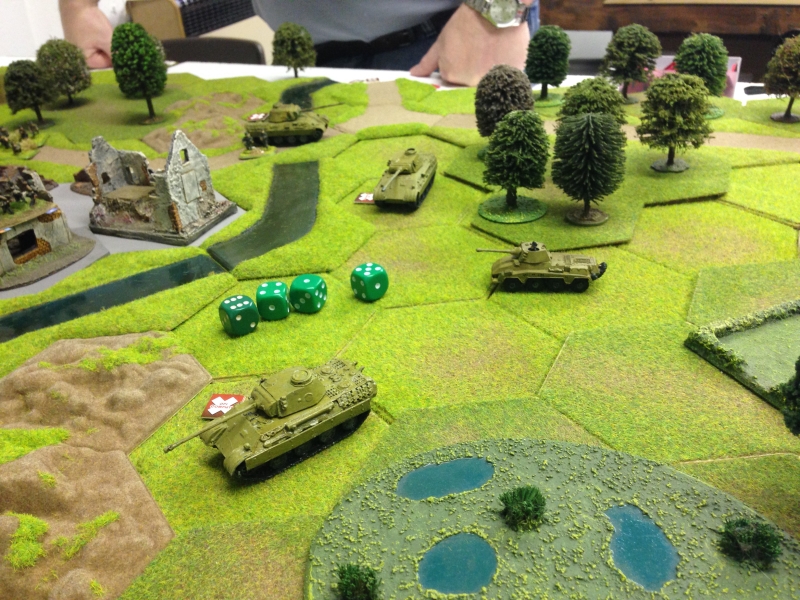 German Grenadiers with Panzer IV support ready themselves to assault Soviet infantry in the woods south of the town. 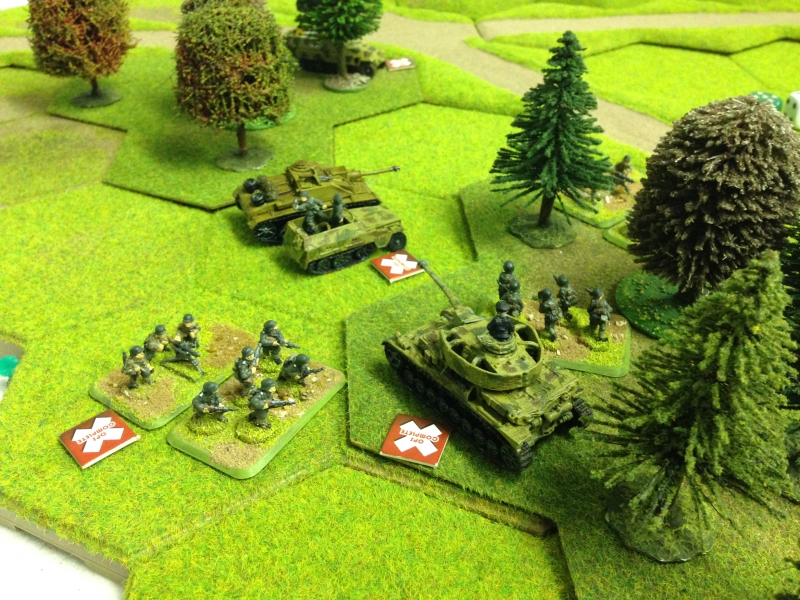 Soviet infantry and a Zis 3 ATG defend the southern woods and south east edge of the town. SS Grenadiers assault the north west edge of the town, supported by Panthers. 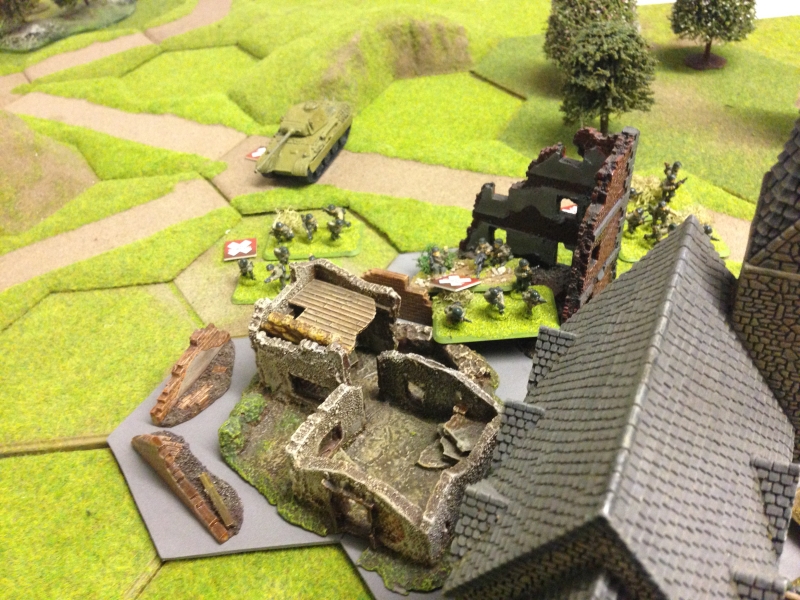 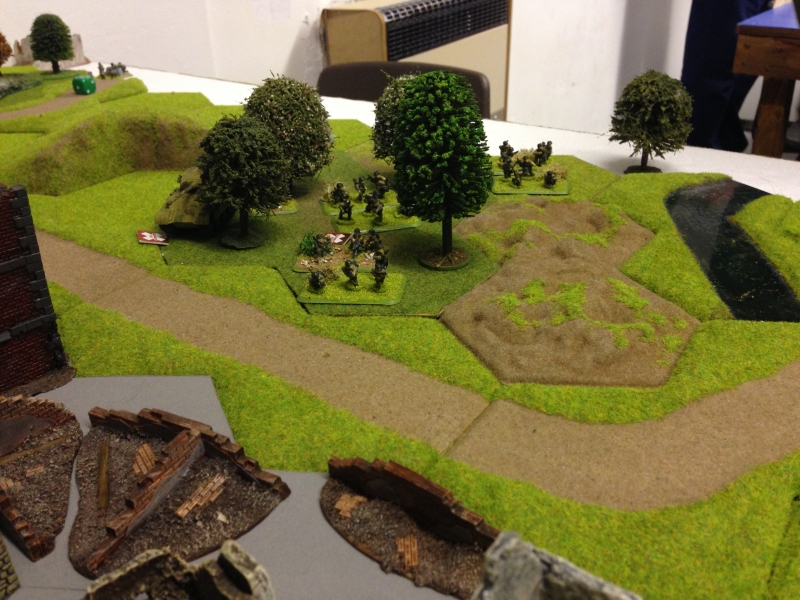 Panthers shell the outskirts of the town,  disrupting and reducing the defending Soviet infantry. 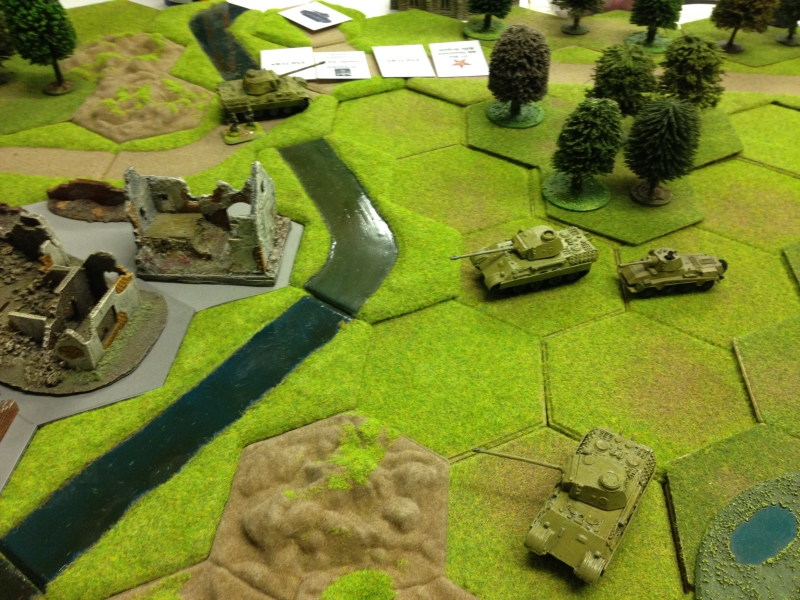 A ‘reduced’ Pz IV hides in the woods near the Southern crossing.  It was damaged in the bloody fighting in the woods south of the town. Soviet infantry are disrupted by opportunity fire from Panthers and Grenadiers as they advance to defend the northern edge of the town.  This will prove a fatal move for them. 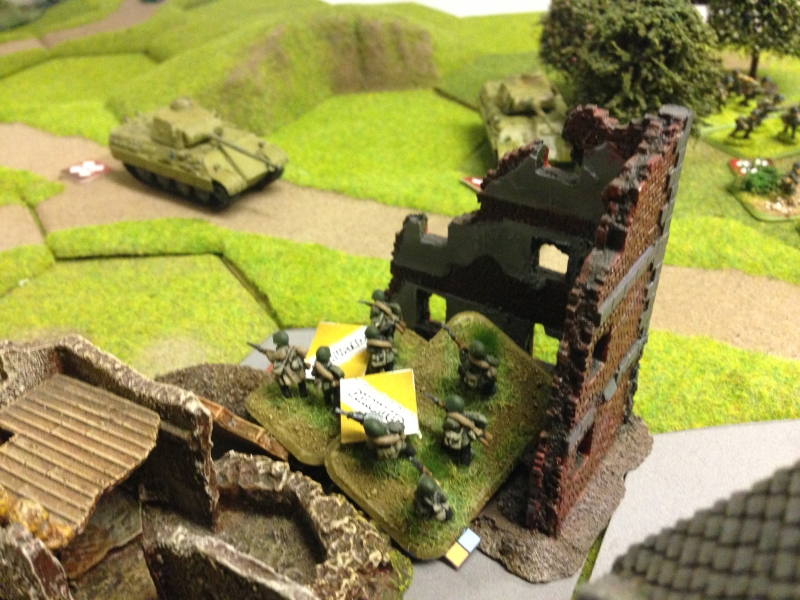 The disrupted Soviet Infantry are bypassed by the SS Grenadiers advancing into the town.  Comrade Commander Barrofski leads the heroic defence of his position and reduces and disrupts the nearest SS Grenadiers. 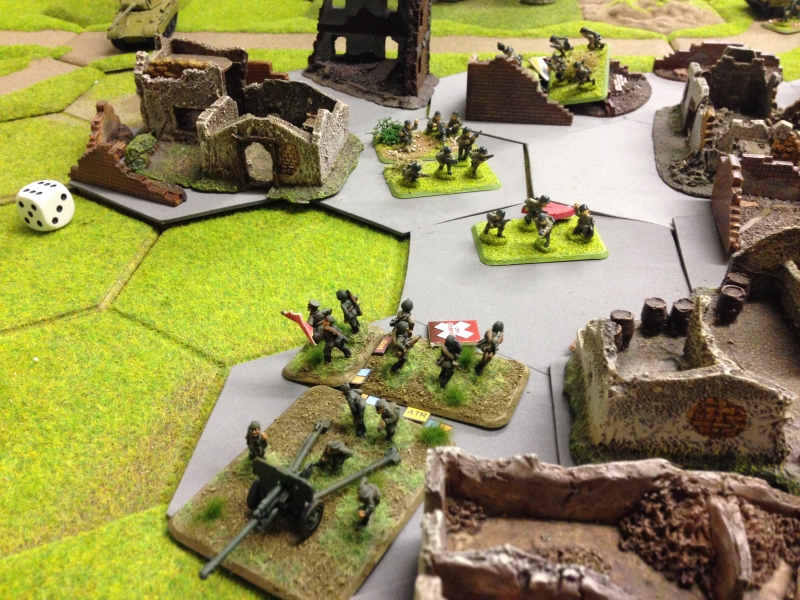 The Soviet Infantry still hold the souther woods and have repelled the fascist assaults, though at some cost. 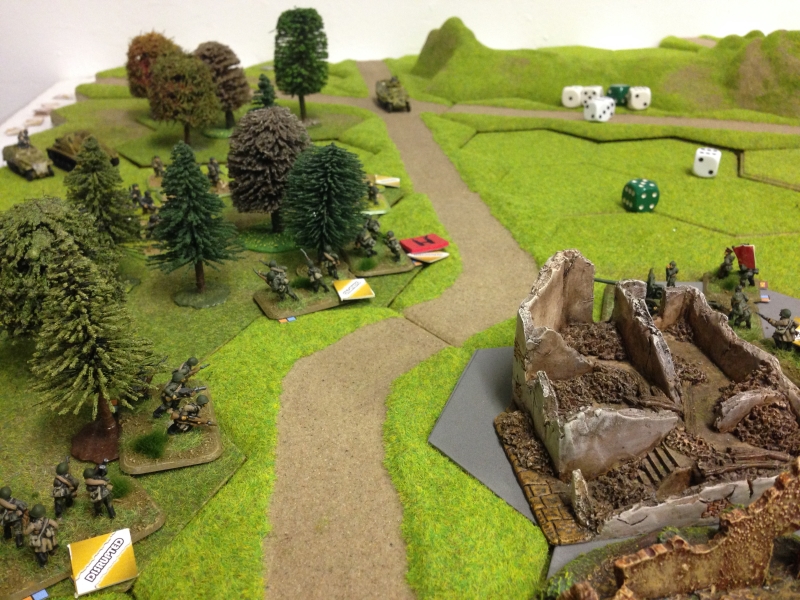 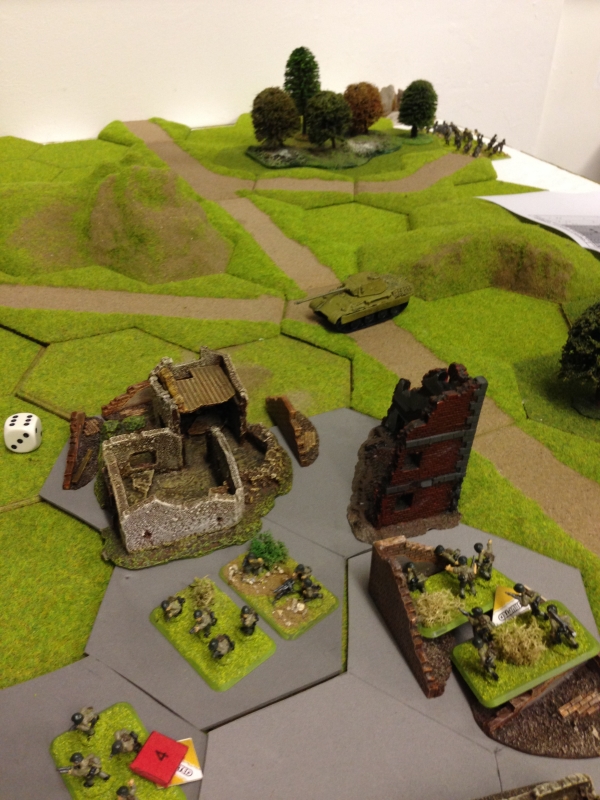 Soviet infantry can hear the clatter of approaching Panzers. 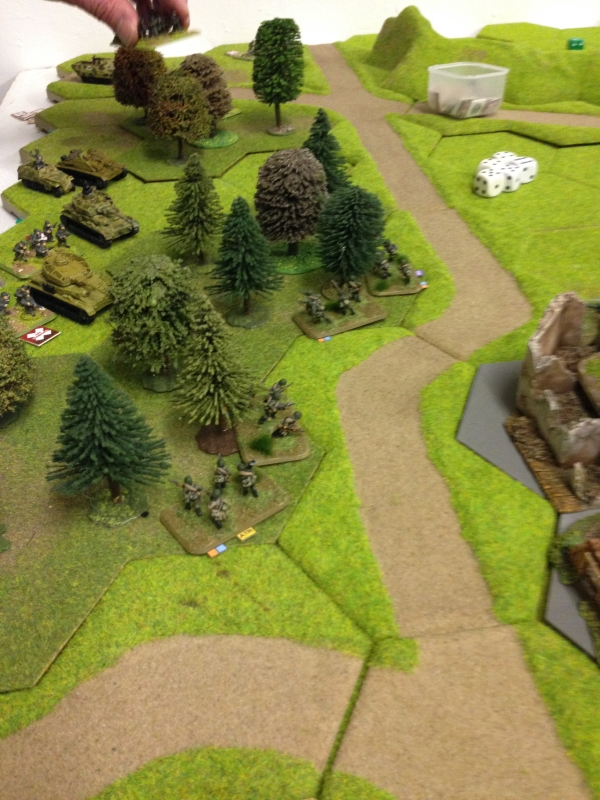 The view from a German Stuka….which failed miserably to have any effect on the battle. Next week will see a Soviet Counter attack to retake the river crossings. Another 8 turns completed last night (16 in total so far).  The Russians are swarming the southern river crossing with T34’s and have crushed the defending Germans in the region.  The town is still held by a strong German infantry force backed by several Sdkfz 251/9 SPG’s.  To the North the Russian T34/85 brigade was chewed up by Artillery, air strikes, defending Panthers and a counter attack by Stug’s and PzIV’s. 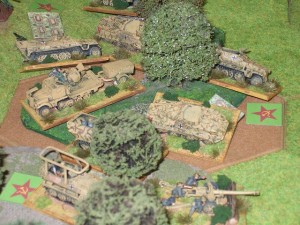 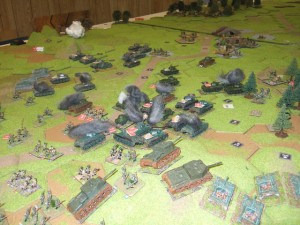 Below are some notes for the next game, some of which we were already using.  The new stuff is in Blue.

I.            Close Assault:  Infantry platoons may only close assault armour units in the open if they are adjacent to them, (i.e., close enough to rush.) The town and city rules stand.

II.            The Leadership bonus to an attacking unit’s firepower (or assault factor) is treated as an augmented bonus (6.1.4).   i.e. you roll the extra leadership dice but the maximum number of hits is no more than the base attack dice for the unit the HQ is stacked with.  So a Pak 40 could roll 6 attack dice but is limited to a maximum 4 hits.