The twin baronies of Rhynn and Carthridge lie on the outskirts  of Terrinoth, far from the Free Cities. Baron Greigory often hosts his friend and ally, Baron Zachareth, at his seat in the capital city of Arhynn, and, over the years the two baronies have aided one another in times of both war and peace. But now, both baronies are in peril. Monsters stalk their forests and mountains, moving with more  urpose and coordination than ever before. A new Overlord is rising, a wicked and dangerous foe, hidden in the shadows, manipulating events according to his master plan. If the Overlord isn’t stopped, Rhynn and Carthridge alike will fall into darkness, and the rest of  Terrinoth will soon follow. Fortunately, a small group of heroes are on the road to Arhynn…

The Blog Posts below will follow each games sessions progress until the final confrontation! 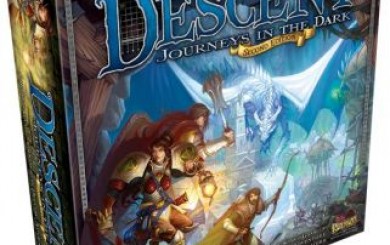 The party started off wandering the lush grasslands of Terrinoth in search of adventure when we happened upon a caravan, burnt and broken with one injured survivor. He told us they had been attacked by pesky Goblins who were trying to sneak into the City unseen. We rushed to the city
Read More
by Barry Fee
1 Comment

Gloomhaven is a game of Euro-inspired tactical combat in a persistent world of shifting motives. Players will take on the role of a wandering adventurer with their own special set of skills and their own reasons for traveling to this dark corner of the world. Players must work together out of necessity to clear out menacing dungeons and forgotten ruins. In the process, they will enhance their abilities with experience and loot, discover new locations to explore and plunder, and expand an ever-branching story fueled by the decisions they make. This is a game with a persistent and changing world that is ideally played over many game sessions. After a scenario, players will make decisions on what to do, which will determine how the story continues, kind of like a “Choose Your Own Adventure” book. Playing through a scenario is a cooperative affair where players will fight against automated monsters using an innovative card system to determine the order of play and what a player does on their turn. Each turn, a player chooses two cards to play out of their hand. The number on the top card determines their initiative for the round. Each card also has a top and bottom power, and when it is a player’s turn in the initiative order, they determine whether to use the top power of one card and the bottom power of the other, or vice-versa. Players must be careful, though, because over time they will permanently lose cards from their hands. If they take too long to clear a dungeon, they may end up exhausted and be forced to retreat.
Jan
26
Tue
2021
08:52 Board Games / Skirmish Games
Board Games / Skirmish Games
Jan 26 @ 08:52