It is the 41st millennium… 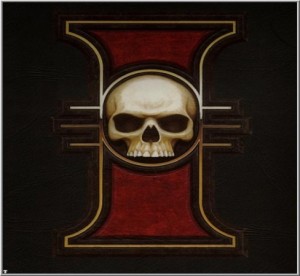 For more than a hundred centuries the Emperor has sat immobile on the Golden Throne of Earth. He is master of mankind by the will of the gods and master of a million worlds by the might of his inexhaustible armies. He is a rotting carcass writhing invisibly with power from the Dark Age of Technology. He is the Carrion Lord of the Imperium for whom a thousand souls are sacrificed every day, so that he may never truly die.

Yet in his deathless state, the Emperor continues his eternal vigilance. Mighty battlefleets cross the Daemon infested miasma of the warp, the only route between the distant stars, their way lit by the psychic manifestation of the Emperors will. Vast armies give battle in his name on uncounted worlds. Greatest among these are the Adeptus Astartes, the Space marines, bio-engineered super-warriors. Their comrades in arms are legion: the Imperial Guard and countless planetary defence forces, the ever vigilant Inquisition and the Tech Priests of the Adeptus Mechanicus to name but a few. But for all their multitudes they are barely enough to hold off the ever-present threat from aliens, heretics, mutants and worse.

To be a man in such times is to be one among untold billions. It is to live in the cruellest and most bloody realm imaginable. Forget the power of technology and science, for so much has been forgotten, never to be re-learned. Forget the promise of progress and understanding, for in the grim darkness of the far future, there is only war. There is no peace among the stars, only an eternity of carnage and slaughter, and the laughter of thirsting gods…

Hi folks! Sometime in the near future, when Cthulhu and Solomon Kane are complete, (or one of the GM’s fancies a break) I’m hoping to run a campaign using one of the 40K role-playing games and I was wondering who would be interested in playing? The systems are (mostly) compatible with one another, are easy to learn (% based) and are designed to be cinematic! I’m very familiar with the rules sets and have played them extensively but there’s no experience in the rules or the background of 40K required.

Depending on numbers there are several options to choose from:

You are a servant in the service of the Emperors’ Inquisition. You stand in the front line of a great and secret war where your duty is to hunt out the foul stench of heresy, the vile alien, and the twisted influence of Chaos. You will tread where others fear, venturing to distant planets, ancient space hulks, and the unsavoury depths of the hive cities.

You will never know fame or reward, yet if you stand resolute your deeds will be whispered to the God-Emperor of mankind and your name will be revered for millennia.

As this is primarily an investigative game, it works best with no more than five or six players… 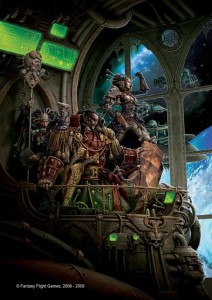 You are an explorer, part of a proud dynasty of privateering merchant princes known as Rogue Traders. You are empowered by an ancient warrant of trade to seek out profit and plunder amongst unexplored regions of space. You will discover forgotten mysteries, find lost human worlds and behold sights never before seen by human eyes.

You must survive the dangers of space, not only the threat of vacuum, cold, and deadly radiation, but the things that lurk in the dark void between stars that man was never meant to find.

This is better for larger groups and my preferred choice as it gives you, the players more freedom of choice. As a rogue trader and his crew there are plenty of positions to fill and it’s easy for characters to fade into the background amongst a crew of thousands. However, it’s still playable with smaller groups too.

You are a Guardsman, tithed from your homeworld alongside countless others to wage the God-Emperor’s wars across the endless battlefields of the galaxy. It is your duty to drive back the horrors that threaten humanity from all sides.

Despite the overwhelming odds stacked against your squad, you stand together, bound by a code of brotherhood and honour. You are the thin line that protects the Imperium from complete destruction. You are the Imperial Guard.

Of the three this would be better with a larger group with at least five or six players as you play the members of a Guard squad (of ten) and supporting characters. It has a built in mechanic to boost the number of guardsmen if the group is small though, so any number could play really. Being the newest of the line I’m less familiar with it.

Although I’ve expressed a preference for Rogue Trader I’m happy to run any of the systems depending on what everyone wants to play, if anybody wants to play ANY of them of course! If you do fancy giving one of them a go, or have any questions, please feel free to email me on [email protected]

Thanks for your time!!