by Barry Fee
club, spartans
Comments are off

If you want to know what the St Helens Spartans Club looks like we took some pictures recently to showcase our table set-up and talk a little bit about the club nights and what games we play. 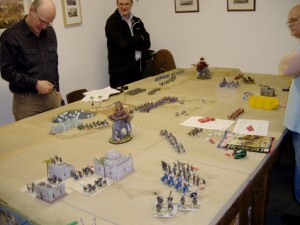 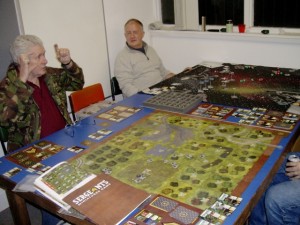 We have three game rooms, a kitchen area, and two toilets all clean! In the kitchen we stock Tea/Coffee Soft Drinks, Chocolate Bars, Crisps and assorted snacks. We have a fridge to keep your drinks cold, and a microwave for members who prefer to bring hot food to the club.

The club has full Wi-Fi internet access and 50Gb of online storage for members to store their gaming materials online. We are working on setting up a permanent web access terminal at the club, but for now members are advised to bring a laptop of an Ipad.

When we were looking for premises the safety of our games and figures were of paramount importance, the club has bars across all windows and the front door is protected by a secure metal outer door.

The main windows and door at the side of the building are shuttered, and are opened for smokers in the Historical Wargaming Room. The building is also alarmed.

Wednesday Nights We play a wide range of Miniature games which I hope you can see from the pictures I have included.These range from Historical games including Flames of War, Lilly Banners, Black Powder, Bolt Action. To fantasy games of all genres like Blood Bowl, Warmachine, X-Wing Miniatures, Dystopean Wars, Very British Civil War, War of the Ring, Warhammer, Full Thrust and Empire of the Dead. We also play a great range of boardgames and Role Playing games.

Tuesday Nights we focus on boardgames and Role Playing games like RuneQuest, D&D, Dungeon Slayers, Rune Wars, Starship
Merchants, Citadels, really there are to many to mention them all but we are always playing new games both old classics like Settlers of Catan to new games.

Sundays is D&D old school, (every two weeks) if you like your games with an atmosphere and plenty of Role Playing opportunities Sunday is  your day. We have recently started a low level D&D 2E Greyhawk campaign. Haunted houses, smugglers and plenty of cheesy dialogue! This is a really popular game at the moment, Star Wars X-Wing Space combat skirmish game from Fantasy Flight

we have a really nice set of black space mats that show hexes one side or blank the other with star patters
spread over the surface. This looks great with any space combat game at any scale, Full Thrust anyone? This was a game of Seargents Miniatures WW2 Squad based skirmish game. Both myself (on the left) and Martin
(on the right) have played this before but we have now only just started to see some tactics for the different squad
setups you can create in the game. Our only criticism its the games cost, I will just says its not cheap! but looks great 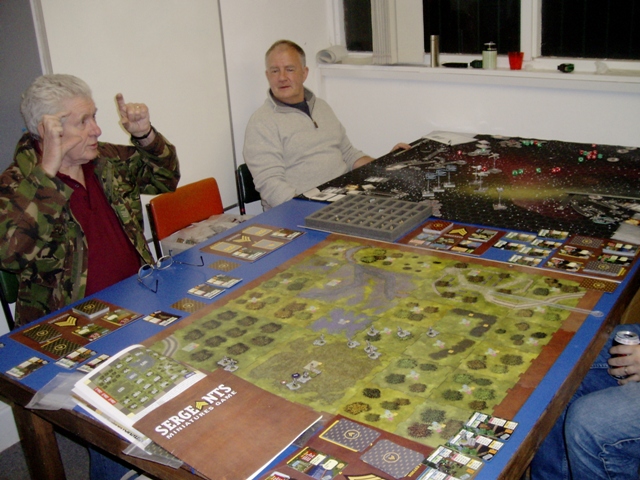 Ron Ball (army jacket) had a bad night and found his American squads flanked from turn 2 by Martins Germans and my Rifle Squad. We played his best but things were not looking good with Martins soldiers surprising Ron’s with a flank bayonet charge. Ron seems to be asking himself “What card can get my troops out of trouble here”? the answer was none! This was a really beautiful looking game of War of the Ring, the large scale wargame variant of the Games Workshop

set of Lord of the Rings themed skirmish rules. The Mumakils rampage around looking scary but ime not sure the rules
allow them to really bully all those archers!

Another long shot of the War of the Ring Game. Thisa larger table is normally reserved for larger figure games and is a good size for multi player armies. 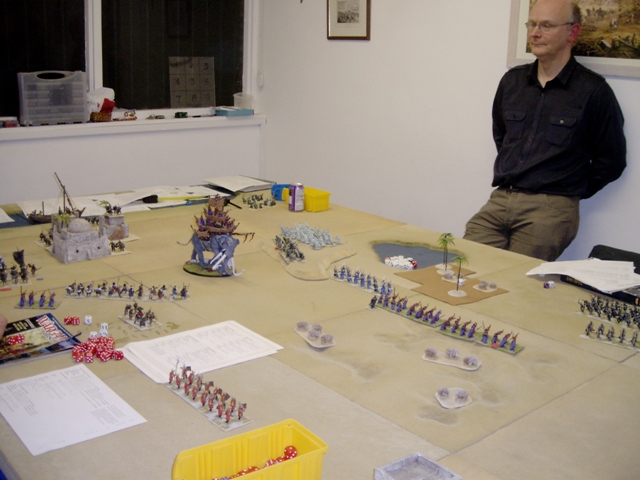 Martin seems resigned to his fate as the Rampaging beast eyes up more of his troops! the club itself. Scott is pondering his next move in this game of Runebound, again from Fantasy Flight. In this game
the players are all trying to build a Hero strong enough to take on the Dragon Lords threatening the landof Terinoth. Now its Johns turn to consider his options. This game has many expansions which include more heroes, artefacts, weapons armour, magic items and spells. Plus a range of large board expansions which change the scenario and replace the centre of the board with a new area to quest on. 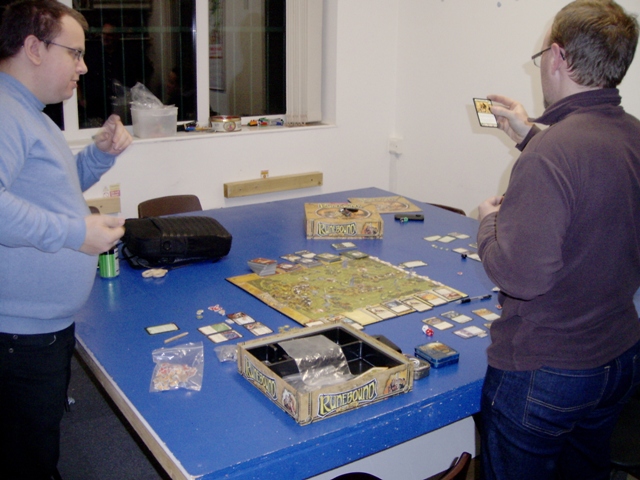 Neil (on the right) and Scott are checking the details of the next encounter!

This table is used for a mix of Role Playing on Tuesday nights, Wednesday Nights and Sundays and boardgames on Tuesdays and Wednesdays. In the third room we have a group of players who are focused more on pure historical Wargaming, this includes Napoleonic Seven years war, WW2, Malburian, Medieval Japan and many others. They play a wide range of rule systems but love to modify them to suit their play styles. This gaming room can accommodate two games at the same time as the table splits in two. Certain rules systems can easily accommodate this setup like flames of war as most games are designed for small tables. As I mentioned we play a wide variety of games at St Helens are are always looking for new members to bring new rules periods and game systems to the club. We would love to see you down one night for a game so feel

free to visit us.