by Barry Fee
board game, fantasy, Role Playing
Comments are off 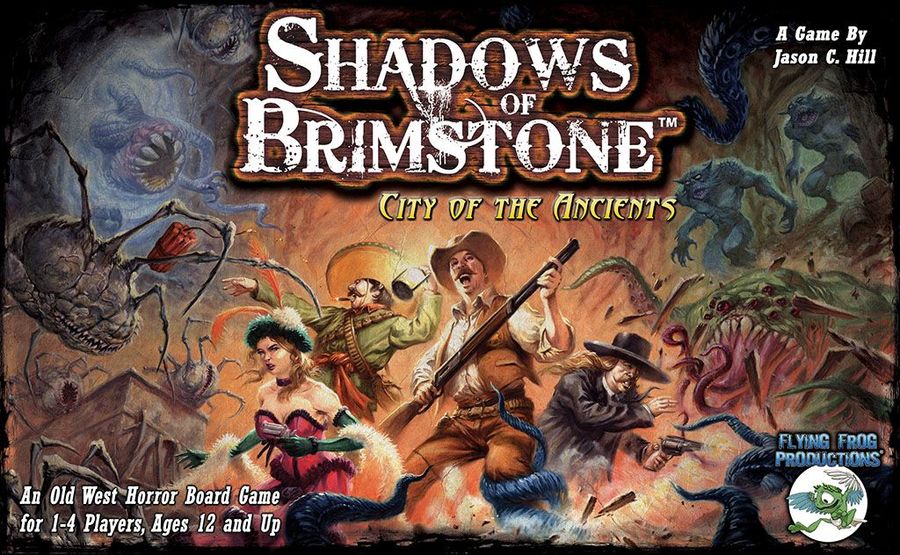 So I started to play this game as a way of keeping myself busy at home in between painting figures for Saga, Strontium Dog, Team Yankee and Flames of War Phew what a mouthful. As you can see I keep myself busy!

We played a campaign at the Wargames club when it first came out but we got a bit bogged down with the rules, character abilities, and mission goals. So I thought why not give it another try solo with updated character sheets and my own little way of keeping track of consumables using the small Character cards on the table.

I played the training Mission “For a Few Darkstone More” where the characters had to delve into the monster-infested Mines near Brimstone and extract as much Darkstone (magical glowing corrupted stone) as possible before the mine is overrun with the “Darkness” and the terrors it contains.

To complete this campaign I picked

My two character completed that mission with time to spare but with some serious mental and physical issues. The Indian Scout “Red Bull” has an ongoing leg injury from attacks by a group of “Void Tentacles” and both Marshall McRue the US Marshall and Red Bull the Apache Indian having collected too much Darkstone have both been mutated.

After a short visit to the Frontier Town, where a doctor failed to remove the mutations and the slashed leg Red Bull had picked up the party took on a mission to Explore a Mine not far from the town. The two characters leveled up to 2 and took on a bounty for Tentacles.

The adventure setup has the party starting as with all missions at the mine entrance. Special conditions in this mission are to explore the whole mine and get out. The rooms are explored in the same way but fewer entrances are found the further in you explore until eventually, all are dead ends. 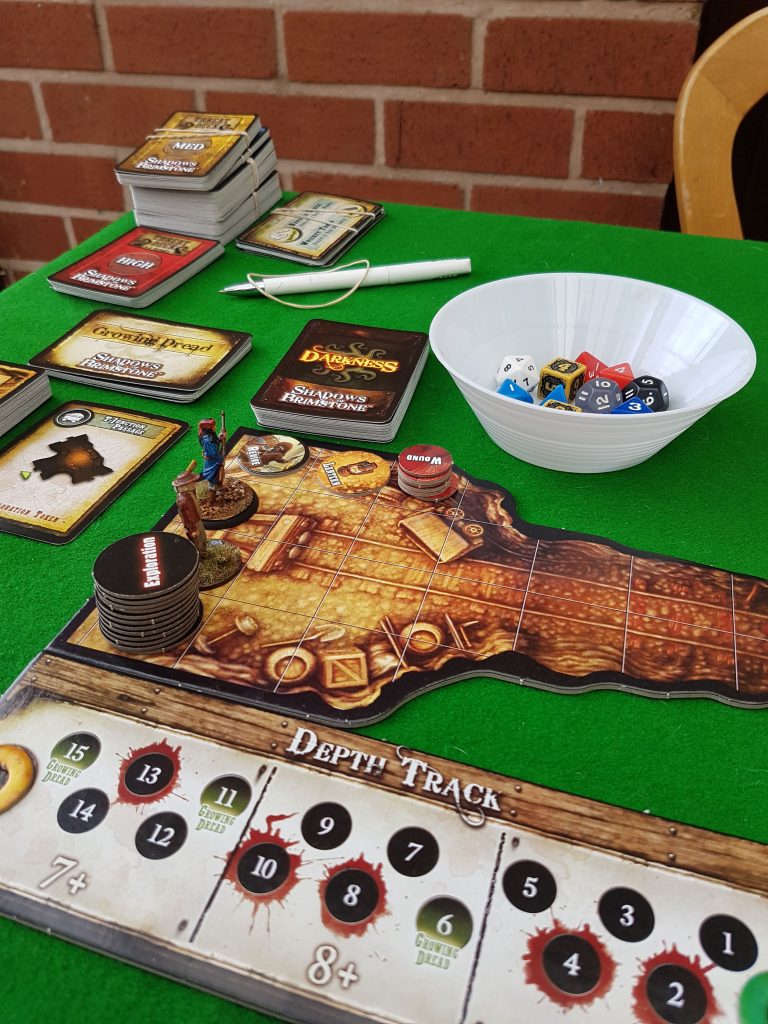 The party moved on after not finding anything through Scavenging the passageways or T junctions until they encountered Mind worms that attempted to burrow int their brains! Red bull took a big hit on his sanity while the Marshall squashed them under his boot before they reached him. 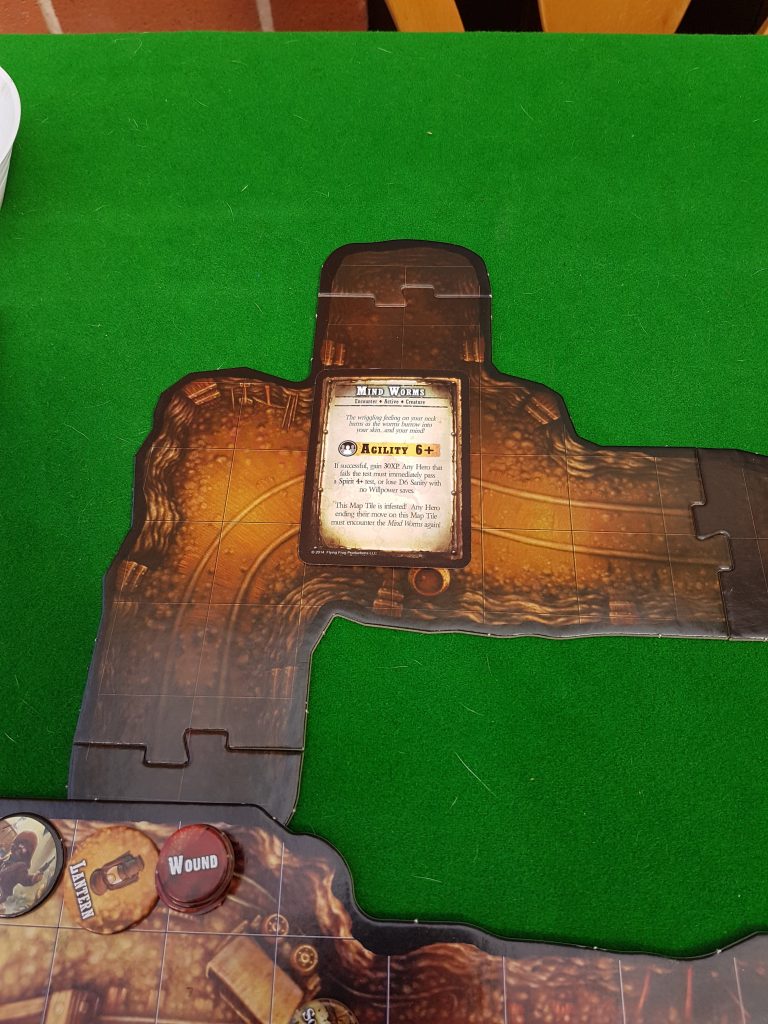 Both Characters survived and moved on to the next cave area where they came across piles and piles of bones, Red Bull nearly fell on the uneven ground but found some darkstone hidden beneath the bone piles. 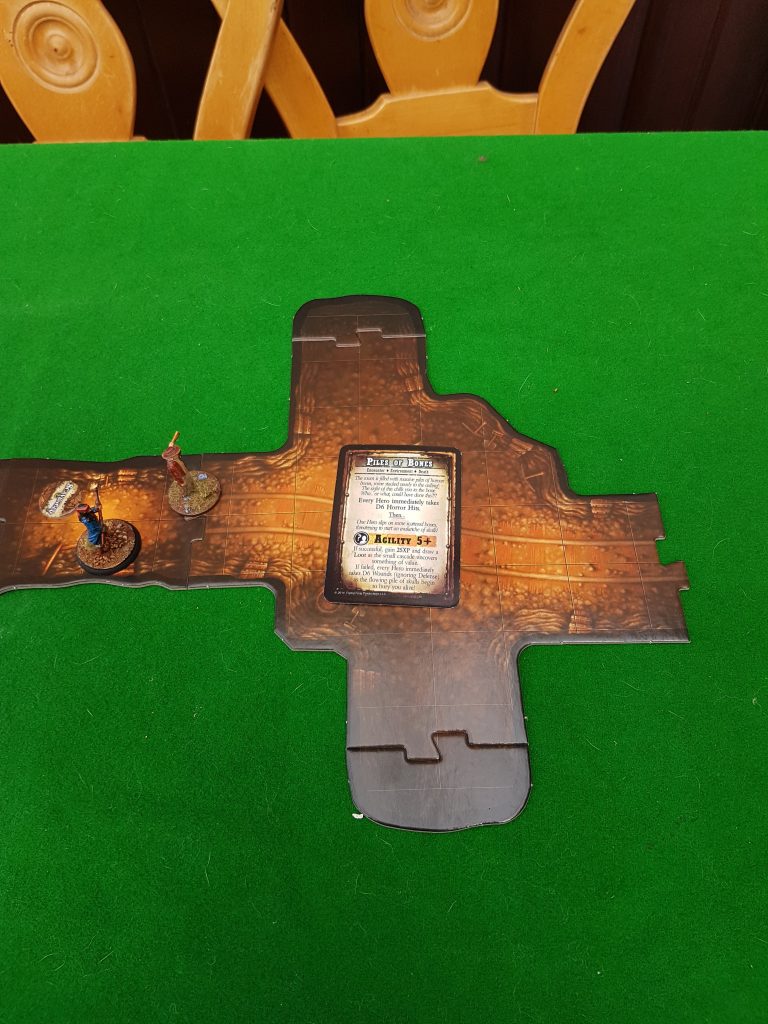 After 2 encounters the party was still in good condition if a little rattled by the bones (excuse the pun)!

Suddenly the game changes when the party continues to explore and come to a mine intersection with 1 exit and 6 void spiders, their eyes glowing at the back of the room. They react first and swamp the Marshall. Red Bull was falling behind as he scavenged each room for whatever trinket he could find leaving the Marshall to face down the critters more or less alone. 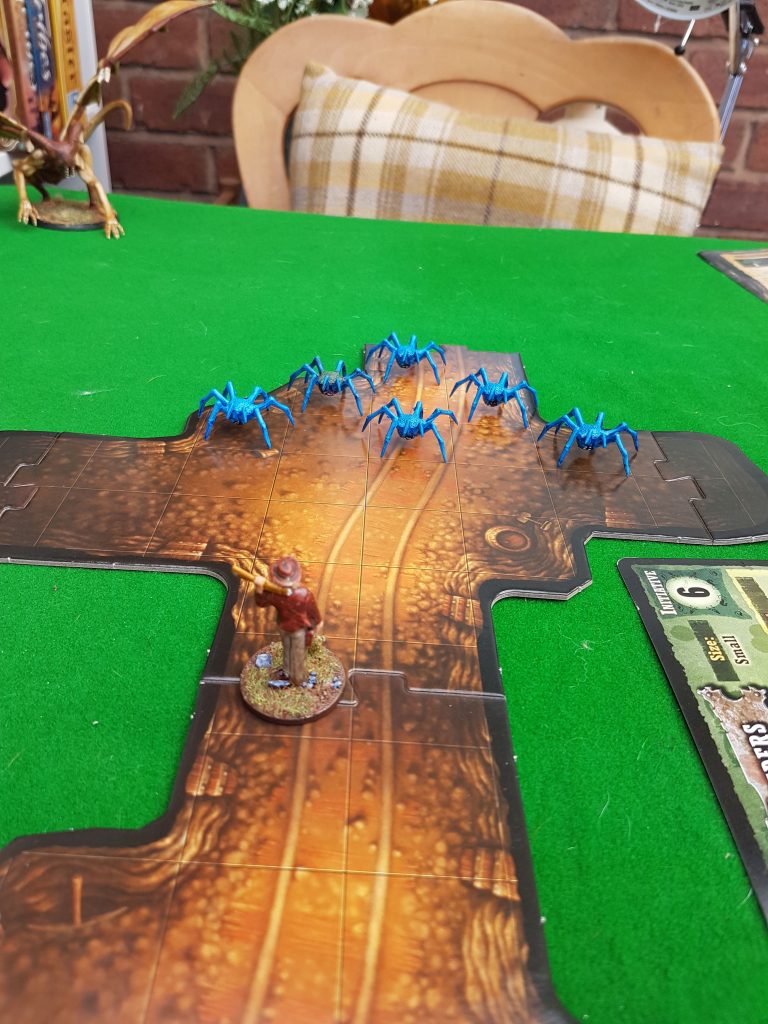 The first round saw off 2 of the ugly beasts, leaving Marshall McRue with 4 to deal with and Red Bull standing back firing volley after volley into them with his carbine. All is going well, no damage and no sanity lost. 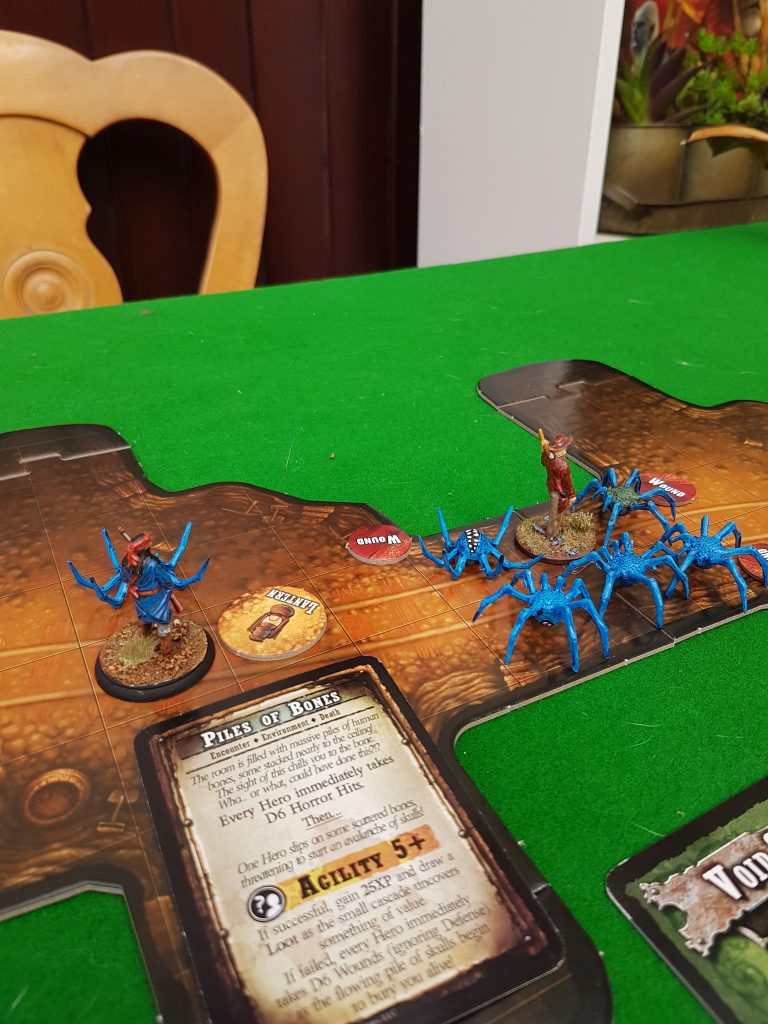 Spoke too soon, after failing a “Hold back the darkness” check I drew an “Eruption of the Dead” “Darkness” card only to find hordes of the “Restless Dead” “Ambushing” the party – Damn these creatures they swing slow but hit hard, 3 damage per undefended hit. At least the void spiders have been whittled down. 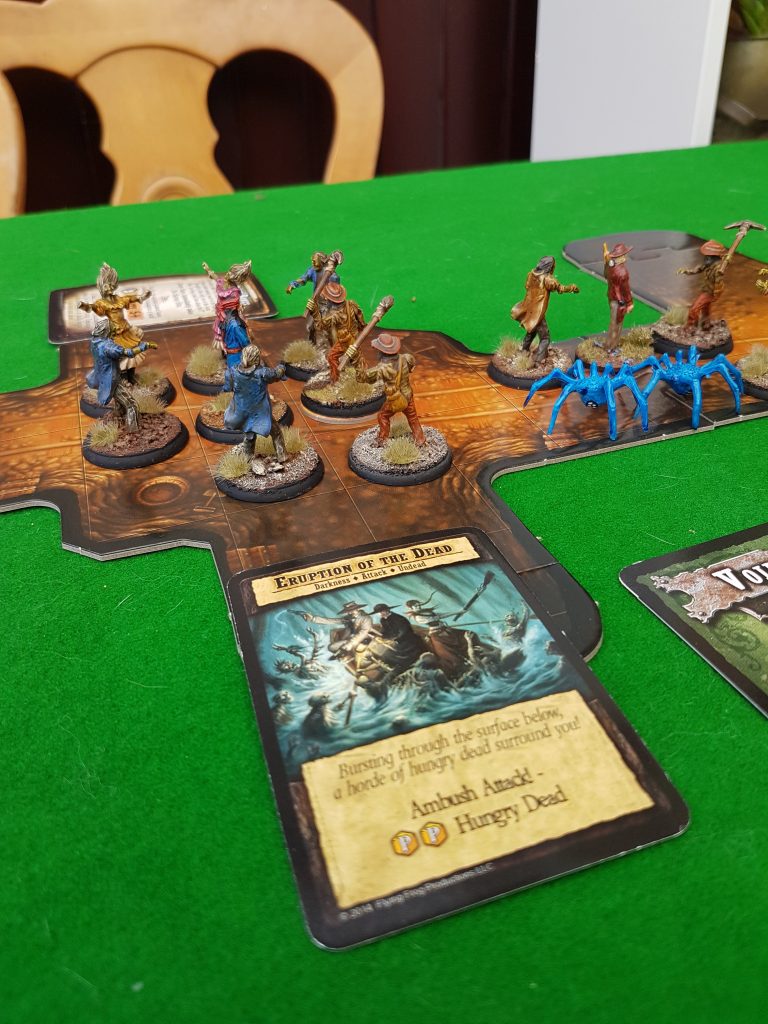 Attack of the Living Dead

The Marshall took a few hits but Red Bull pulled back to a safer position, the Hungry Dead move 2 so are never catching him unless he rolls 1’s on the move dice. Only 1 problem I moved him so far away he started to hear “Voices in the Dark” as the Lantern was on the Marshall and Red bull was drawn back into the dark undulating shadows of the Mine. His sanity took a big dent as his Indian past forced memories of dead shamans and long-lost ancestors into his thoughts. 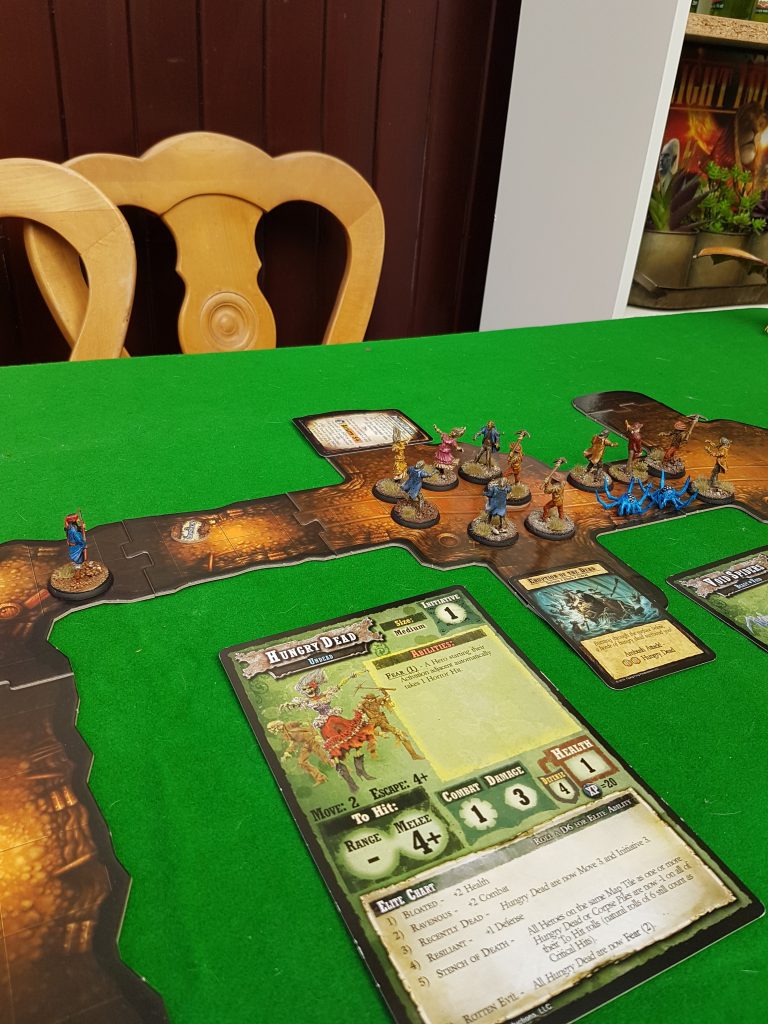 Marshall McRue was holding his own but still found it tough going as he waded through the undead throng. In the meantime Red Bull was wasting Zombie after zombie with his carbine and clocking up the XP. 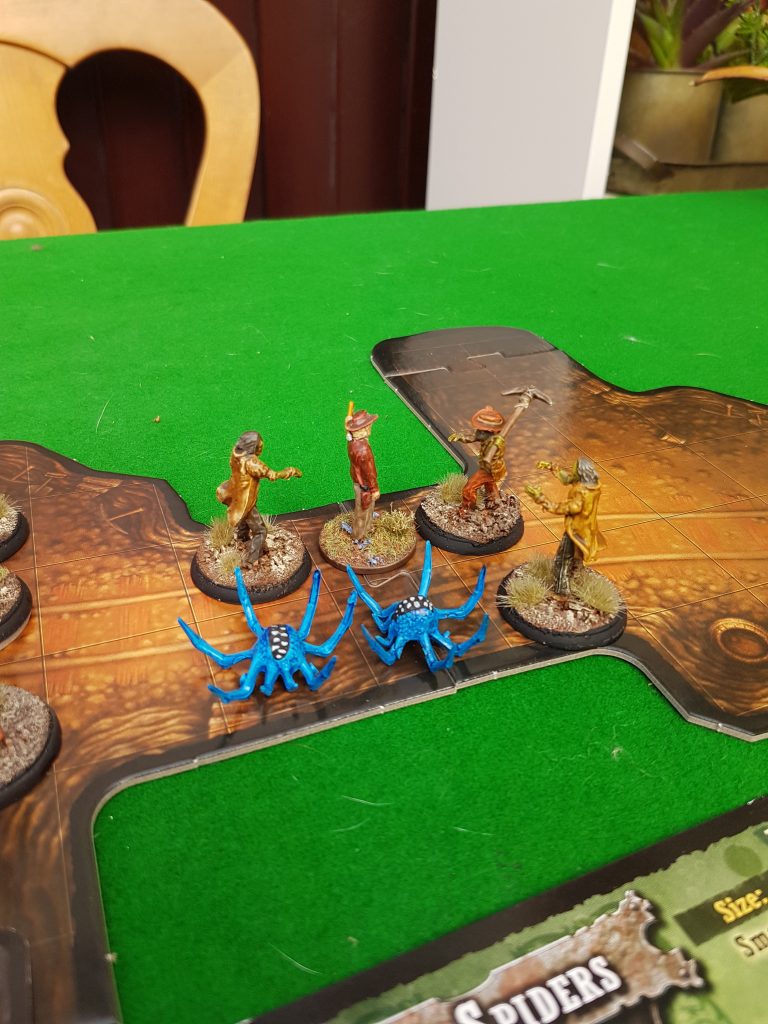 Finally Red Bull finishes off the 2 Zombies that got to him and he works on the last of the creatures surrounding Marshall McRue. Eventually all the creatures were dead (for now) and the party had time to loot the room and take a breath. They needed it as both had lost both Sanity and Health. 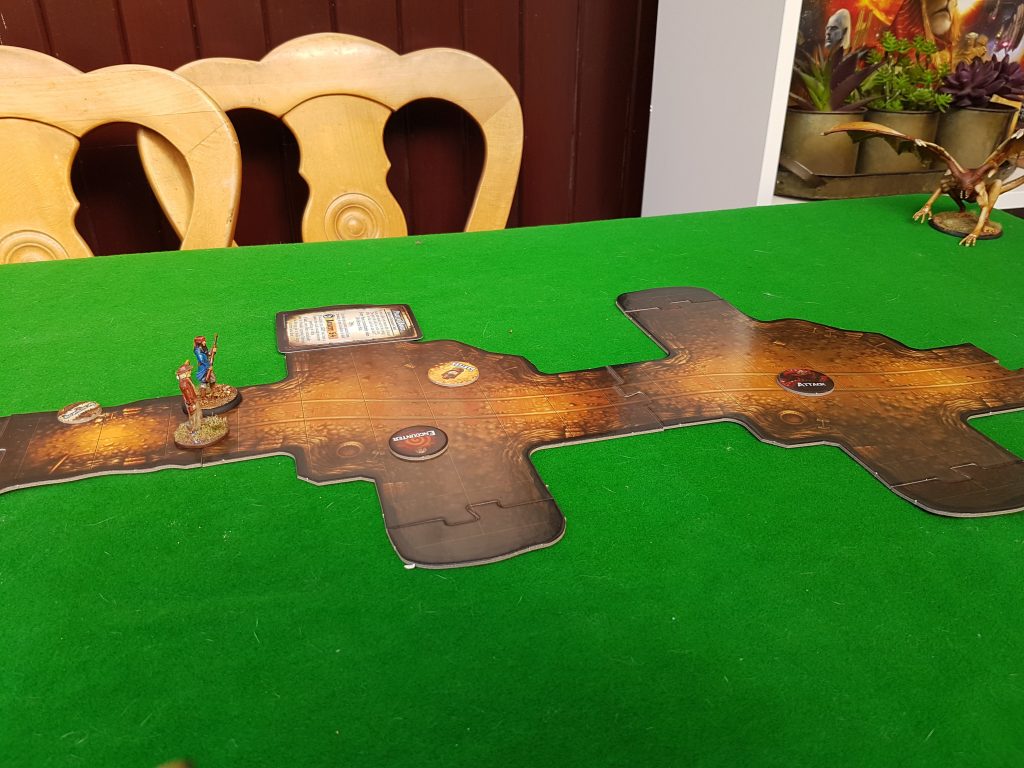 Without a rest, the next section of the Mines throws “Stranglers” at the party. Horrible demonic creatures with thick tentacles that bash and constrict their foes. Even the mere touch of the creatures are enough to drive the party insane. With the Marshall rusing ahead he is again first to encounter the demons. 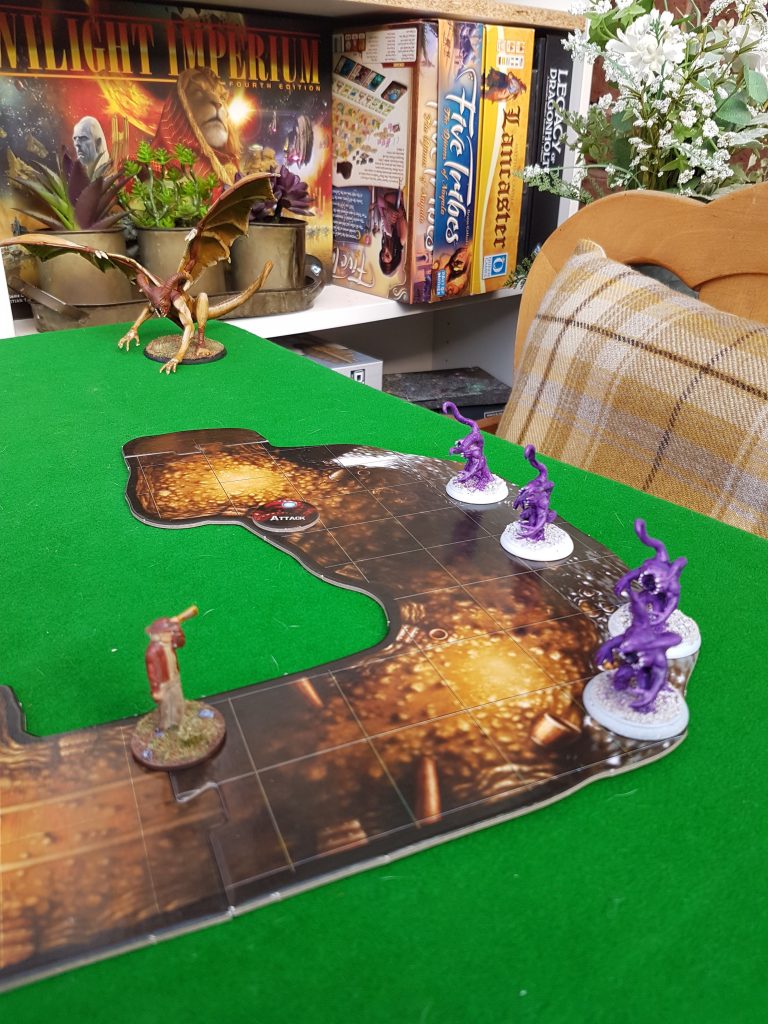 Single-handedly Marshall McRue takes them on while Red Bull snipes away from the next room in complete safety. Marshall keeps his cool but takes both a massive hit on his sanity for the creatures swamping him and a few choices blows to his tough body. Both men are struggling at this stage to survive. thankfully Marshall McRues mutated tail has delivered some stinking bites to the creatures as each one attacks 4 times, so has 4 chances to get chomped! 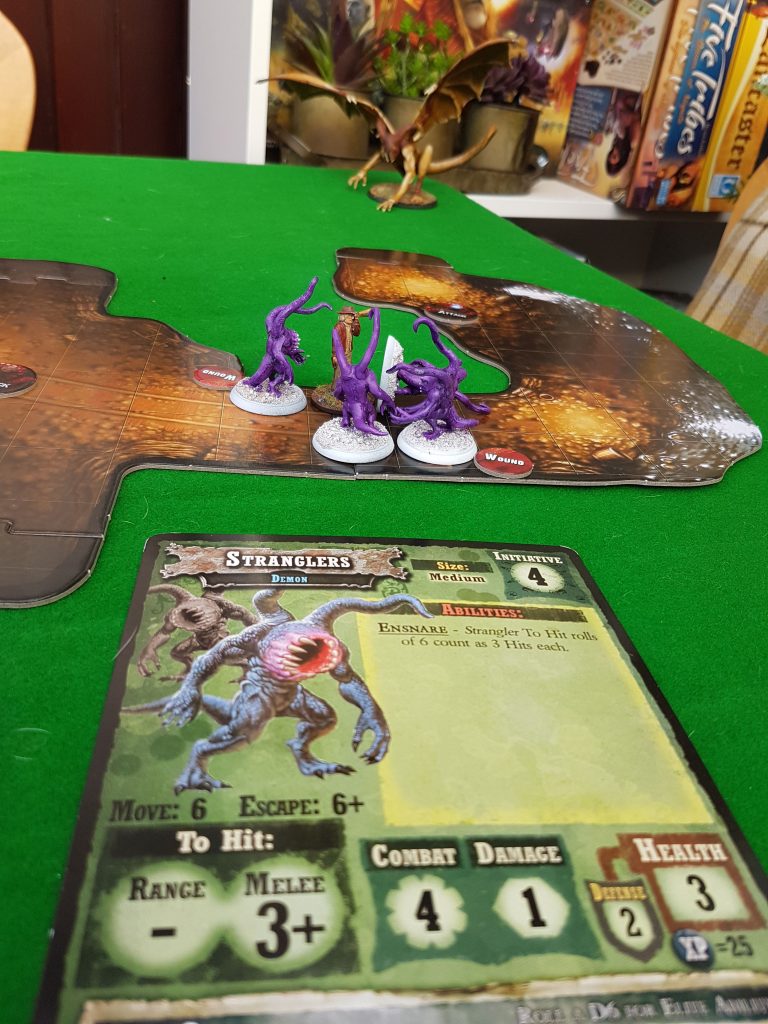 Red Bull keeps firing and takes down a single creature in each turn while the Marshalls Shotgun is far to slow to hit the writhing creatures. By now his Sanity is cracking and his hit points are ctitical, time to eat the herbs he saved from scavaging earlier! Phew 8HP back what a life saver.

In addition to the challenges faced room by room my terrible dice throwing meant the darkness was growing ever closer to the entrance and time was going against me. Plus I still had  awhole section of the Mine un discovered near the entrance (first T junction I went left). 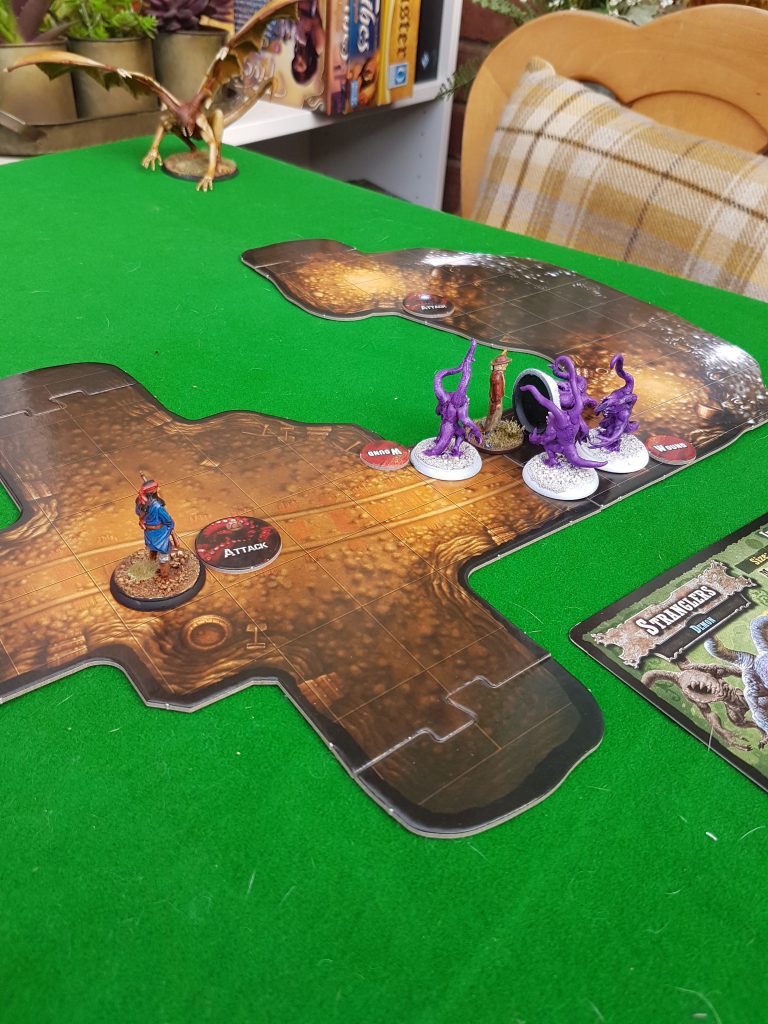 In an amazing stroke of luck, Marshall McRue found an ancient Indian artifact in the demon’s room the fables “black Fang Hatchet” and when combined with the other Artifact found in the “For a Few Darkstone More” I think Red Bull is going to be able to deal out some real punishment in close combat! Time is really against the party now as those fights took far to long. When combined with my poor “Hold back the darkness” rolls I really needed to rush on! As if that was not bad enough I pulled a growing dread card that hit both characters hard on the sanity and Marshall McRue was down to 1 Sanity left, he could run or drop to the ground screaming at any second! With that, I decided to run as fast as possible to the next section of the Mine and hope for the best. As luck would have it I rolled a dead end room and completed the mission, now all I need to do is get out before the darkness escapes. I charged out of the Mine with both characters intact and sane but with only 1 more number to go on the Darkness Escapes track so Phew what a relief! I got 350 Gold for the mission an artifact and 2 Darkstone, not a bad haul for a mornings work. Now back to town to sort out these mutations and get Red Bull’s leg fixed!