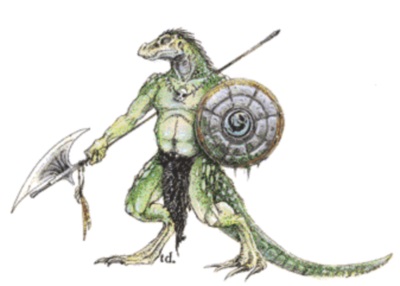 The party continued to investigate the Lizardman lair and found themselves face to face with 2 Lizardmen females dressed ornately playing chess and rubbing oil on their skins. But before the group had a chance to quiz them they were attacked by a large patrol, who forced them back out of the Harem and into the adjoining room.

The group rallied and Badulf ventured back in for a quick scan of the scene, opening the door he witnessed the Lizardmen had made a makeshift barricade with the table, luckily dodging a javelin he quickly retreated. Deciding that room was too well defended the group made their way south where they found five more guards. Quickly thinking about an ambush, the door to the previous room was barred while the party took care of the unprepared guards who were caught also oiling their skin.

After  the mop up of these unfortunate Lizardfolk the party continued to push on further into the unknown still grasping for clues as to the real reason for the Lizard people to stockpile the weapons they found. avoiding doors with noise behind the group finally arrived at a rather more ornate room occupied by a very old very crusty looking Lizardman. 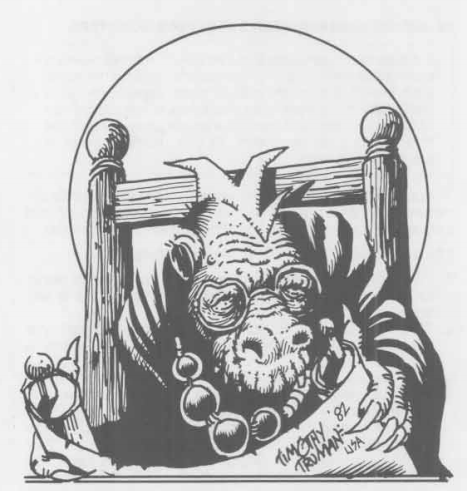 Strangely he bids the group welcome and converses with them in common, he seems both surprised and cautious at first but after asking a number of searching questions about the party’s motivations for being here he agrees to introduce them to the Lizardmen Chief who would be interested in possibly bringing Humans into the Alliance??

The party questioned him at length about this alliance and it seems that the Lizardmen are not preparing for war against the Humans of Saltmarsh but are forming an alliance of sea folk, including Mermen, Koalinth, and Locathah against their evil enemy and enemy of all creatures the Sahuagin. The evil creatures once established in a region will destroy all other tribes including human settlements for leagues around to secure their hunting, and mating grounds. So far they have dispossessed the Lizardmen of their home, and only by retaking their home from the Evil Fish people will the scourge of the Sahuagin be defeated. 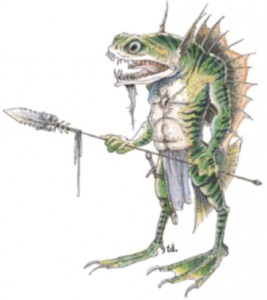 The party were cautiously introduced to the chief, and after a short interaction between the Lizard Elder and the chief it appears all was well, but still hurting from the loss of his people to the party the Chief demanded Weregeld or blood payment for his losses. The party agreed to pay, and also agreed to be detained while the Chief counted the bodies of his brave guards.

The party were then led away to the cells to be held until morning, all but one! Slip Digby 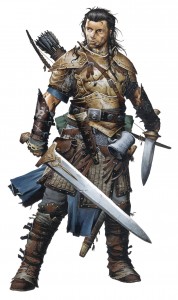 The thief had managed to hide in the tunnel that led to the chiefs muster hall were the introduction meeting was held. Slip kept hidden and sneaked behind the party as they were led away. Witnessing they were poorly guarded he decided that their captivity was not in his best interests and murdered the only guard watching their cells while he slept. The party argued with Slip about his actions and refused to leave, still looking for more mischief he then investigated sloshing sounds coming from one of the other cells. In it he found a cell made for an aquatic creature with a hole in the floor leading to a deep dark pool. Noticing its new visitor the aquatic creature begged for release, stating its very life was in danger from the evil Lizardmen who had taken him captive and were preparing to eat him. His peaceful appearance and sad demeanour tugged on Slips heart strings and he agreed to show the creature the way out.

On the way to the entrance a Lizardman patrol was spotted ahead, slip froze but the creature begged for a weapon to defend himself with! Slip agreed ! a BIG mistake the Evil Sahuagin stabbed Slip without hesitation, critically wounding him, then,  screaming in defiance it charged at the confused and terrified Lizardmen cutting them down. While this happened Slip, clutching his shoulder wound, slid back to the cells to await his fate.

Next morning saw an angry Chief demanding answers to who killed his guard, who released the captive Sahuagin and why there was one more person in the cells than he remembered.!! 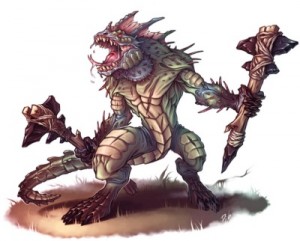 After some quick explaining the party are only partially believed, Slip only just gets away with his explanation of the nights events and the Chief looks to the party for more information. Finally backed into a corner, wanting the human involvement in the alliance but fearful of the repercussions from his opposition in the tribe the Shaman and their supporters the females.. he agrees to release the party as long as they help him by defeating a giant Croc that had been killing and eating his people. The party agreed and asked for their equipment back. The chief ordered the party to be led to collect their equipment from the Temple where it was stored by the Shamans.

On the way to the temple the party noticed that female Lizardmen were following and running ahead of the group when they arrived at the Temple the party and their Lizardmen guards were attacked by three Shamans and six females. After a sleep spell put two of the Shamans out of the fight and a Colour Spray dealt with the females the party attacked the remaining Shaman leader 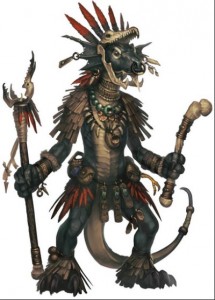 Shaman Leader Opposed to the Alliance

He lured the party close to the Altar then cast a Snake Charm spell on himself, as the party closed in for the kill a Massive brown snake was seen slithering out of the Altar and with one bite it killed Badulf the massive half Orc! Stunned by this new danger the party fought on. Realising the Shaman was controlling the actions of the snake Figore Foechuckle the Gnome cast an illusion of Fire around the Shaman which broke its concentration and forced it to cower surrounded by imaginary flames. The party quickly took down the Shaman and the Snake finally ending the fight by tying up the sleeping and unconscious Lizardmen shamans and females ready for the chief to deal with them.

The party showed great interest in the hollow Altar and fished inside for hopefully some booty, what they found turned out to be a real mystery, inside they uncovered a leather cloth with a strange swirling sign on it wrapped round three strange faceted gems with swirling colours, alive with browns and russet tones. Slip thought about ditching the find but something inside told him to keep hold of the weird items as they may have great value! 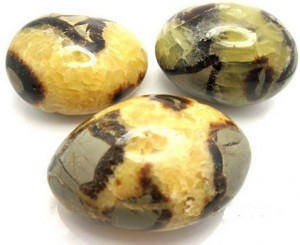 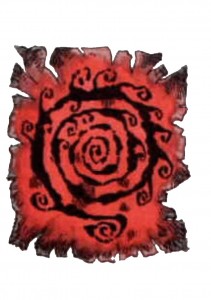 They pocketed the find and moved on, travelling back to Saltmarsh to discuss their investigations and the proposal of an alliance with Baroness Gematurg and the Town Council. The journey back was uneventful but the council meeting was sombre when the real threat was discussed. Everyone in the meeting agreed the party should return and agree the alliance but only after the Croc threat was dealt with to show the Lizardmen the party could be trusted. In a side conversation with the Baroness the source of the weapons was discussed and it was found that the assistant to the blacksmith Tabari was in fact the person responsible for the manufacture of weapons in Saltmarsh following Tabari’s problems after leaving the service of his Troop in the Dukes Militia. The party mentioned that Igor the assistant may not be playing with a straight deck so to speak and that he could be  manufacturing weapons illegally for the smugglers who were then selling them on to the Lizardmen. The Baroness said she would get this investigated.

Finally the party spent a day healing up and resting, apart from Quinn who began to cast the identify spell on the strange Gems, almost instantly he cast the spell his mind was enveloped in an amazing scene of swirling purple mist that seemed to circle what he could only describe as utter evil! The scene was so vast and so dizzying he passed out and was found later in the evening by the party unconscious at his bed in the Screaming Phoenix tavern.

This ended the session, the group will level up and prepare for the next part of their mission in two weeks