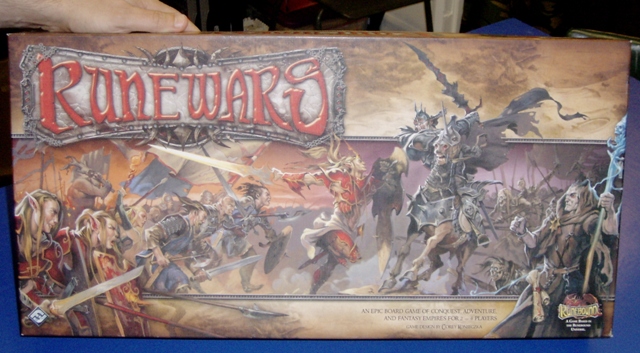 “It is a time of war. The scribes and sorcerers of the land of Terrinoth, having begun to tap into the power of the mysterious dragon runes, have unwittingly set the wheels of conflict to turning. Though they comprehend only a fraction of the true potential of these artefacts, the rulers of the realm understand all too well that he who controls them controls Terrinoth. Drunk with aspirations of power and covetous of the runes of their neighbours, the leaders of Human, Elf, Undead, and Uthuk raise massive armies and march against each other. At the same time, brave heroes venture forth from their home cities on perilous quests, in the hopes of claiming a dragon rune for their king and eternal glory for themselves.”

Runewars is a fantasy, conquest-genre board game based in the same universe as Fantasy Flight’s Runebound and Descent. There are four empires that players can represent: Human, Elf, Undead and Uthuk. This game was played in the Spartans HQ in St. Helens on Tuesday 7th May 2013. There were 3 players in this game:

As we were all either new or reasonably new to the game, we started off with a run through of the main rules, before constructing the board. Each player chooses a random piece of land which they then place on the table, interlocking with other pieces before finally placing our individual empire’s homelands. These lands always stay as part of your empire (unless of course you are overrun and destroyed by a rival empire!). A stronghold is also placed on one of your homeland hexes. Finally, to complete set-up neutral monsters are placed on the board where indicated. These monsters can either be fought or, with a bit of tactful diplomacy, invited to join your army. Luck is needed for the latter, however, as was to be found later on! The starting board layout can be seen below. 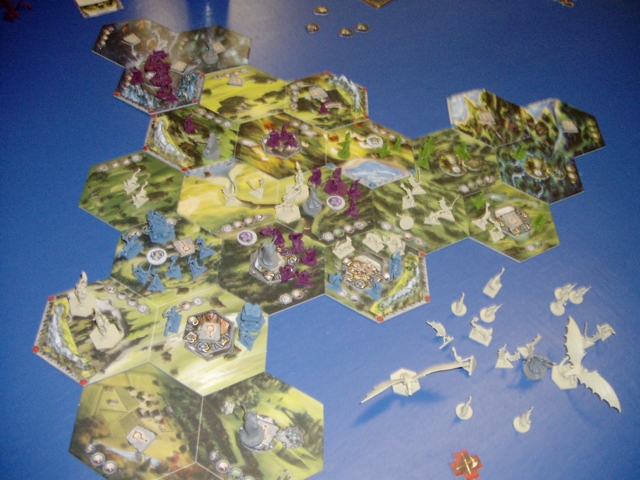 The game is split into a number of years (usually 6) and each year is split into 4 seasons: Spring, Summer, Autumn and Winter. Each season is one turn and events occur at the start of each season which can be good or bad.

Year 1: In The Beginning…

Spring began with each empire recruiting soldiers for their army. These can be seen in the picture above. Barry’s undead minions can be seen at the top of the board (in maroon), Andy’s Elfish horde are to the right hand side (in green) and my human lords are at the bottom (in blue). Subsequent seasons saw Andy’s elves recruit more soldiers and then move to a hex with neutral monsters (2 razorwings). Naturally, he could’ve decided to either fight the razorwings or try his hand at diplomacy, trying to woo them to his side. Doing his best Elfish impersonation, Andy chose the latter. Unfortunately, when asked to ‘Love Him Tender’ they treated him like a ‘Hound Dog’ and sentenced him to a long stay in the ‘Heartbreak Hotel’, running away to a nearby hex (see below)! 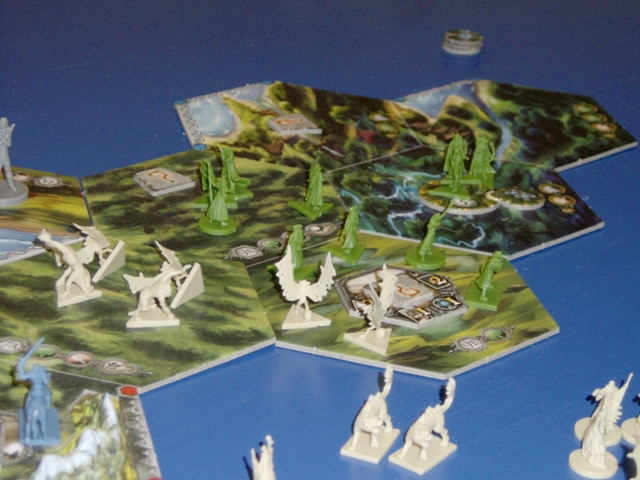 Meanwhile, the dastardly undead horde of Waiqar the Undying (aka Barry) had managed to persuade a dragon to their side (see below). The dragon was placed on its side in their stronghold to signify that it couldn’t move during the rest of this year. Myself and Andy, at this point, knew that someone was liable to getting their fingers burnt by this move…. and it would probably be one of us! 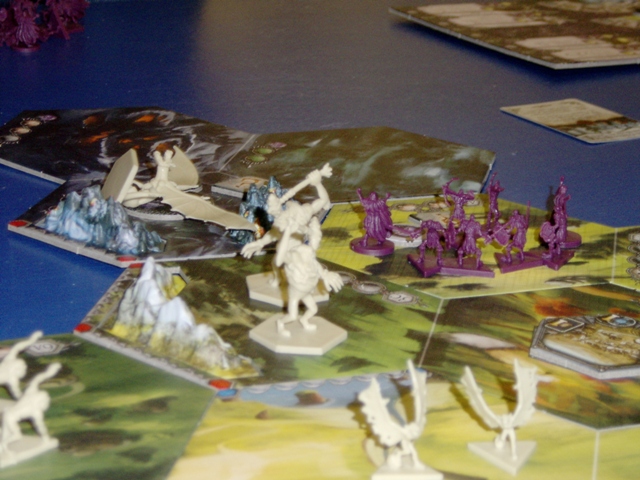 It was the end of the year, and winter was coming. Little did we realise at the time, but food stocks play a part here with no more units allowed per hex than food rations. All three armies suffered substantial casualties due to the adverse weather and lack of food. Even the undead suffered losses and they were all skin and bone (well mainly bone!) to begin with!

Year 2 – The Spread of Empires

During the summer season heroes (separate to army units) can move independently and attempt to complete quests. My hero (Runewitch Astarra) attempted a quest to climb the nearby mountain inhabited by giants (see below). She climbed to the top, and found….. nothing! It was a nice view, but the reward she was after was not found. Bah, humbug!

Waiqar the Undying’s undead army grows stronger by the season (see below). More recruits and now the dragon is awoken! Andy’s Latari Elves and my Daqan Lords occupy several cities each, garnering fresh supplies and extra recruits, but will this be enough to withstand the onslaught that is surely to come from Barry’s undead advances? 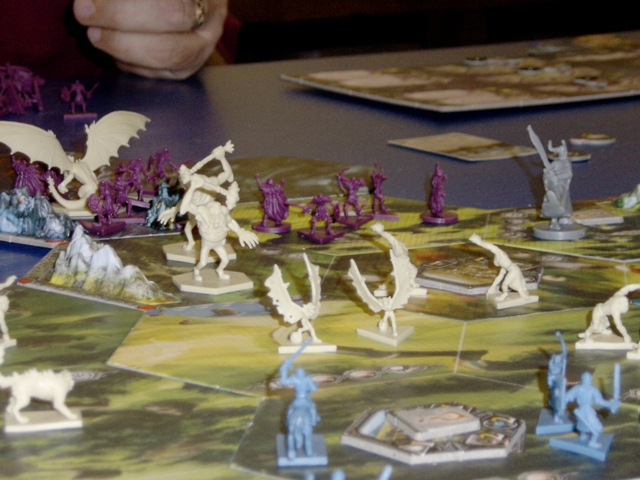 Winter comes around too quickly for Andy. He hasn’t managed to increase his food supply  sufficiently to be able to ward off the harsh winter months without taking casualties. The Latari Elves now seem to be in poor ‘elf, perhaps easy pickings for the undead advance! After having played an event card myself, I have to destroy a city. Taking stock of the situation I strike at the most powerful faction on the board and destroy Barry’s one and only city. I feel the full weight of the glare of Barry and know that on the next turn Waiqar the Undying’s war machine will surely turn to face my Daqan Lords! Yikes

Year 3 – Invasion of the Undead

It’s Spring again, and as anticipated Barry’s undead army close in on my Daqan Lords cities (see below). The dragon sits ominously on the next-door hex, ready to raise my city to the ground if necessary! 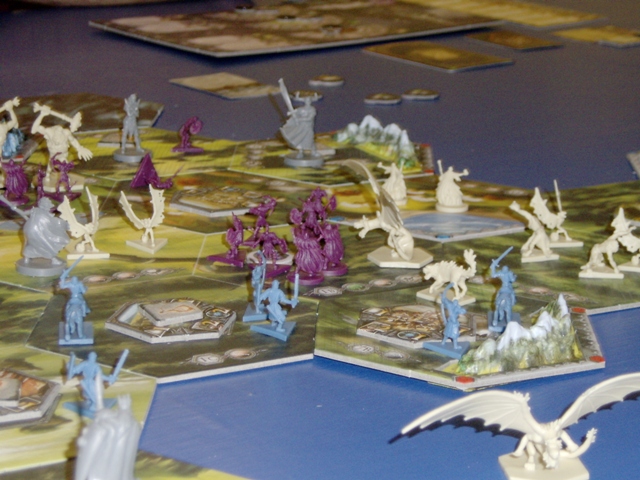 In preparation for the invasion I bolster my defences recruiting more archers, swordsmen and even a couple of hellhounds (see below)!

Meanwhile, as Barry is preparing to invade, another of his groups of the undead have managed to coax two giants to fight on their side (see below). Unbelievable! Waiqar the Undying, apparently, is as good as his name! 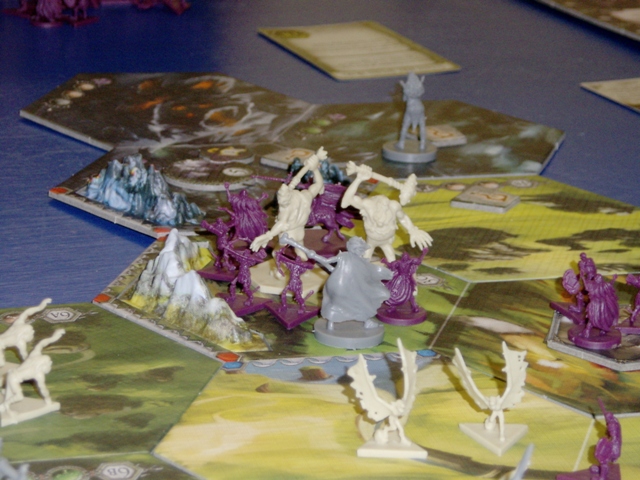 Barry’s undead horde eventually invades one of my cities (the one with the hellhounds). My archers and knights at first do some damage to the undead ranks, hitting the dragon numerous times. The hellhounds are useless, and an archer gets swarmed by the skeleton warriors. The dragon’s turn results in a flame attack which destroys another archer and the two hellhounds (barbecued hellhound anyone?!). Finally, the knights take down the dragon only to see the evil sorcerer conjure up…. even more skeleton warriors! The undead horde now contains more units than at the beginning of the battle! Shocking! The final nail in the coffin occurs when the skeleton warriors tear, once again into the knights, and take them down. All is lost! Abandon all hope all ye who enter this city!

The year ended with the board as shown below, with Waiqar the Undying’s army occupying the city close to the homelands of the Daqan Lords (centre, bottom) and the Latari Elves regrouping around their homeland area (right).

….and then it was 11:30pm! Time to end the game. I think overall, we have to give the victory to the Barry’s undead empire, but be warned heathen, the elves and the humans will rise again! Who knows….. maybe next week…. and maybe with you as their leader!