by Barry Fee
15mm, Ancient, Field of Glory, Wargaming
Comments are off

We are learning the Fields of Glory V2 rules at the club, and after two smaller games we decided to play 1 large game and try to get a number of new players into the system.

Forces of Alexander and Darius line up, the Macedonian center is to be held by a large sprawling Phalanx with its wings locked on the Village to the Left and his superior Cavalry on the right.

Persian forces have loaded their left wing with good cavalry, and the right wing with more good cavalry and its guard unit. The center right will be defended by the Greek mercenary’s and the weak center will try and avoid combat. Persian light infantry moved up to harass the Macedonian center left and at the same time Macedonian skirmishers took up position in the fields on the outskirts of the village.

Persian cavalry on the right moved into a position to engage the skirmishers and sole Companion cavalry unit on the Macedonian far left. 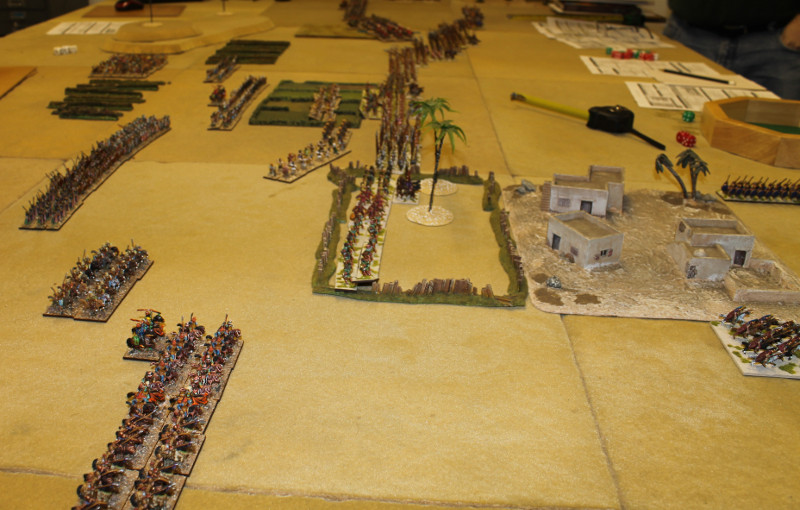 The Persian right flank Cavalry moved forward to threaten the Macedonian skirmishers and look for an opportunity to envelop the center with a large forced march round the flank. Macedonian Skirmishers hold up the Persian heavy cavalry for the whole game in the enclosed fields on the outskirts of the village. While the opposite flank cavalry jousting continues with light horse evading charges from the Macedonian cavalry supporting the pike right.  The Macedonian Iphikratean Hoplites charge though the rough ground in the centre scattering the Persian skirmishers to their front. The fluidity of cavalry movement meant the Pike in the centre could turn and push right offering a threat to any cavalry unable to manoeuvre around the terrain. Persian light cavalry looked to out manoeuvre the Macedonian cavalry without success. 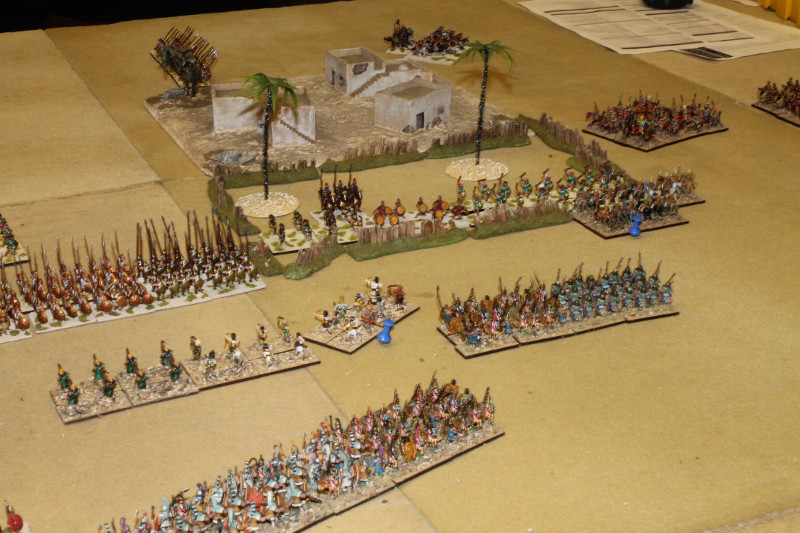 The Persian center, bolstered by the Greek mercenary’s move to a flanking position on the Pike left and attempt to threaten the skirmishers operating in the enclosed fields, while the skirmishers kept up a ineffective but steady flow of missiles. 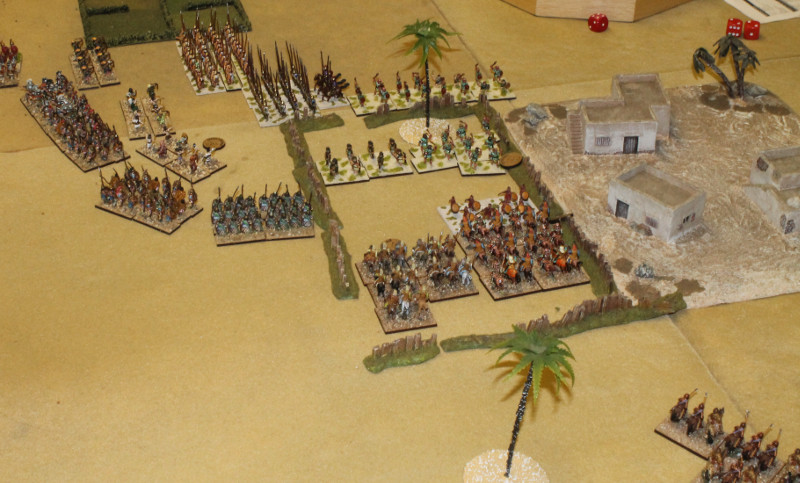 The Persian cavalry finally break into the fields but still find the difficult going a big problem when clearing skirmishers. Their movement is slow and their order is shattered. Although they are slowly beating the light infantry they are not clearing them away quickly enough. Meanwhile the Macedonian Pike close on the Greeks. Andy Kills Darius III with double 6!!!! The Persian centre flees in fear at the sight of Andy’s smirking grin! The Bactrian (Persian side) Cavalry look in a bit of bother as they attempt to extricate themselves from a Macedonian sandwich! Which in fact they did following a good dice roll from the leader, Phew!!

The real meat of the battle in the centre, as the Macedonian Pike centre closes on the Greeks and the Iphikratean spear attack the Greeks from the right.

The Persian centre now routed can offer no more resistance to the Macedonians apart from some Levy and a single battle-group of Crescent Shields. The Persian Cavalry on the left having destroyed the Macedonian Companions were unsuccessful at closing on the last of the light horse, or even flanking the Pikes. Fortunately enough damage was done to the Macedonian right flank forces to force a draw overall with both sides scoring 11 points.