Gears of War “The Boardgame”

by Barry Fee
board game, gears of war, sci-fi
Comments are off 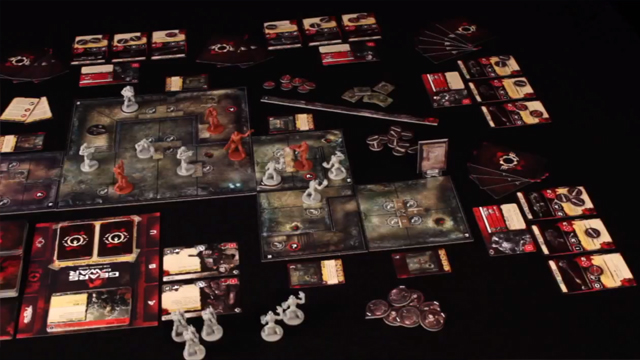 Game description from the publisher:

For a time, the humans of Sera knew peace…then Emergence Day came. The Locust horde arrived without warning, and countless horrors spilled forth from their underground burrows. The Coalition of Organized Governments (COG) struggled to fend off the subterranean threat, but their defenses were quickly crushed. With billions dead, humans turned their weapons of mass destruction on their own cities to deny the enemy control. Now the long struggle against overwhelming odds approaches one final, desperate stand.

This Tuesday we decided to play gears of war the boardgame by Fantasy Flight, as our DM for D&D was unavailable. What a great choice of game as the three of us who played, me, Phil Crompton and Rob from War and Hobby all had a really fun time getting our backsides kicked by the Locust Hordes.

In the scenario we picked we had to find a suitable place to put a scanning device which was going to map out the Locust nest that had taken up residence beneath the area.

In the game you control an operative member of “Delta Squad” part of COG! or “Coalition of Ordered Governments” our main task is to survive, in the process of doing so you must kill the Locust monsters, pick-up ammunition and guns and make your way from room to room using action cards that dictate your choices.

An example of a typical action card would be: 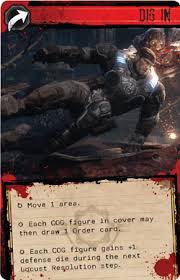 So as you can see you are offered a movement a chance to take cover and some defence, other cards tell you you can attack between 1 and three times, or Heal, or Ambush a creature, etc I’me sure you get the gist.

The characters you play have different abilities and mix of starting weapons, but these change as you pickup more stuff throughout the game.

In each persons turn you collect upto 2 cards which is classed as healing, this is because the cards in your hand are your hit points. As you take damage you loose cards, and choices. When you have no cards to are “Bleeding out ” and a friend has to come over to you and spend a card to “Get you Up”. Once up you start collecting cards again, in so doing you heal up.

After you collect your two cards you choose a card from your hand and follow its instructions. You need to always be looking to move towards the objectives as the Locus Horde will just swamp you otherwise. You attack the enemy on your tunr by rolling a number of special dice depending on your weapon and weather you decide to use extra ammo.

If you damage the enemy they can drop items, but this is rare, and can lead to “Loot Rage” as Rob demonstrated last night.

Once you have taken you move and fight you draw a Locust Card or “AI” card which dictates the actions of the Locust. This may mean more appear of they move towards you and fire or in Robs case they swamp you and stomp you!

The Locust are classified as A, B, or C A being the weakest then B and C the deadliest. They all have their own attack and defence properties and special abilities. They are surprisingly nasty in large numbers as we found out.

After they have taken their turn it moves on to the next member of your team and so on until you are all bleeding out of the mission objectives are complete.

I have to say it was a really good game with lots of umms and Aahhs ! We did not finish but we got our backsides kicked in one turn which mean two of us were bleeding out and the last one only had 2 life left so we called for immediate medivac out and went home.

Loved the game recommend it to anyone who like a co operative challenge.

More picies of our game below

My Character and his weapons and ammo

Locust moving in for the kill !