Just in case anyone was wondering what happened in the Dystopian Wars game that was mentioned a week or two back, here it is:
In Dystopian Wars, every fleet has certain defining characteristics: the Britannian Fleet has great all-round firepower at all ranges, with a good mix of weapon types. Defensively they are good, especially the Dreadnought with 2 Shield Generators, whilst the Russians have massive close range firepower and nothing much else, but the ships have great defence with a combination of Ablative Armour and Generators. Once the ablative armour has been penetrated, then the defence becomes ordinary, but it allow the ships to survive to make use of their superior close range firepower
As we haven’t played the game for a while, and one of the players was new to the game we were (re)learning the rules and tactics, so both sides made mistakes.
The first two turns were mainly spent manoeuvring for position. The Light frigates and destroyers of both fleets raced ahead, and by turn 4 there were barely any afloat, having been destroyed by the mighty battleships and cruisers. 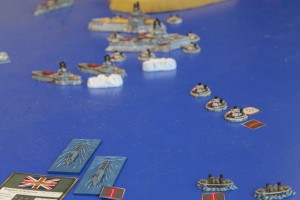 The Britannia Admirals learnt that firing torpedoes against ships with anti-Torpedo Generators is a bit of a waste of topedoes. The Russian admiral remembered (too late) that sending the light ships ahead took them out of range of the capital ships’ support (oops).
Use of the mimic Generator on the Russian flagship, combined with the Iceberg generator on the Aircraft carrier, allowed the Russians to isolate the Britannia Battleship and submersibles, effectively keeping them out of the game for a few turns as they manoeuvred around them. Meanwhile the whole Russian firepower could be brought to bear on the remainder of the Britannian fleet. 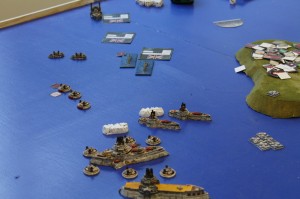 The Russians eliminated the Britannia Cruisers, so that the remaining battle was between the Russian Dreadnought, Battleship and Carrier plus a cruiser squadron and the Britannia Dreadnought and aircraft Carrier – this unequal battle could only end one way….. 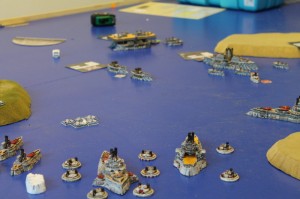 The Britannian ships concentrated fire on the Russian Battleship, to try to cripple it before the rest of the Russians got in range, but its ablative armour allowed it to survive successive volleys of hits without damage.
A lucky shot from the Russians early in turn 6 caused a fire on board the Britannian Aircraft Carrier which stopped the ship from being obscured. The Russians concentrated all the remaining fire on the ship until it finally sank
The Britannia Dreadnought managed to do some light damage to the Russian Aircraft Carrier, but decided that discretion was better than Valour, so headed for home before it suffered the same fate as the Carrier 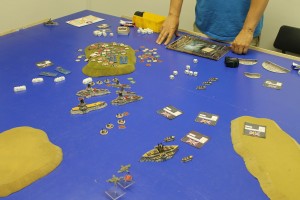 All in all, everyone agreed that it was a fun game, with loads of learning points, and we resolved to have another battle in the future.

About the Author
I started playing Dungeons and dragons in the late 1970's and continued well into the 80's until I got married and started a family Eventually I got back into the hobby and have never looked back, playing an eclectic mix of SciFi, Fantasy, SteamPunk and Historical wargames
Social Share
5 Comments