The session started mid way through a fight, the party on the first floor were in the midst of a battle with a Sahuagin patrol, while Val’Vael invisibly searched the 2nd floor and the Dwarf Grimm with two Lizardmen investigated a Chief’s quarters.

The battle raged for another ten rounds with Pelors grace seeming to leave Jeramia’s dice! his magical defences meant he was almost untouchable but his tired arms meant his sword swings were also not making much headway into the enemy’s ranks.

Moragg continued to battle with the sea creatures and blow after blow killing one after another, until no more sahuagin faced his massive heaving form.

Talon the Ranger appeared from his patrols and delivered volley after volley into the hard pressed Sahuagin, his arrows flying true and fast finished off or injured 5 of the foul creatures.

Slip kept himself safe and looked for opportunities to stab the creatures in the back without success, but his involvement in the fight meant the end of the patrol.

The fight ended with another sahuagin escaping so it was agreed the group would leave now before more patrols arrived. After the fight a debate took place on the merits of continuing, it was finally agreed that the party would wait for Grimm to return with the two remaining Lizardmen then they would return back to the alliance with their report. Grimm arrived shortly after with a massive bounty and they set off to find Elmo, and assist him in his efforts to get back home to the Sea Princes.

As the group attempted to leave they heard footsteps coming from the way out. They stood their ground and waited eventually they came face to face with two star crossed Sahuagin lovers who had been taking a secret swim outdoors. The confrontation quickly developed into a fight as the large male sahuagin strode forward to defend his muse. The large creature looked senior  as his physique and skin markings were different to the other creatures the group had fought. The front lines came together instantly Jeramiah and Morag standing tow to toe, while the unarmed Sahuagin leapt into them with claws teeth and feet flaying their defences. The confidence of the group as suddenly shattered though as the female Sahuagin uttered a word and gestured with her small Staff, suddenly Jaramiah and Moragg were held Rigid in position unable to either move or defend themselves, seeing his opportunity the Male creature began to rake Moragg with tooth and claw. Slip charged in looking to even the numbers, but was instantly blinded by a magical darkness that descended on the corridor. Val who was guarding the rear, heard the commotion and quickly returned to the group, just in time to witness the female utter another word of divine blessing and Talon reeled from some form of magical unseen damage. Val aimed his wand and instantly turned the large Sahuagin into a Frog, the creature flopped to the floor in front of the party and begun to comically hop around, his partner seeing this brandished her staff and let loose a lightening charge into the party that did minimal damage. soon after the Paladin and half Orc recovered and assisted in killing the creature quickly before her powers caused any more harm.

When the party finally found Elmo he was looking healthier but still seemed exhausted from his incarceration. Jeramiah offered him the return of his possessions and escort out back to the exit, this is when things started to go really wrong. Elmo wanted his wand, his ring, his cloak and his book back to aid him in returning unharmed to his land. When the Paladin, who had previously given his oath that his possessions would be returned, asked Val to give them back the elf point blank refused saying he did not know what the Paladin meant. This shocked and surprised the group as he had been using said Wand, ring and book earlier on that day.

The elf said he was not going to return the items as the group needed them to fight evil, the Paladin demanded their return to Elmo but still the elf refused. Val was then threatened and told “return them or Else”!. hearing the threat Val donned the ring of Invisibility for his own protection and stood his ground. The party decided to leave the location quickly while the issue was debated so as not to alert any more Sahuagin patrols. Val followed and the debate continued over the Causeway back into the swamp land.

The “Debate” too a turn for the worse very soon after the party arrived back in the swamp land. It culminated with Val polymorphing Old Elmo, who failed his system shock and died, followed by Talon attacking Val who responded by turning Talon into a Frog and then making a quick escape into the Swamp.

So after my advice to the party to get on better, and stop loosing characters they lost 2 in 1 session! very interesting.

A great session overall lots of Roleplay, the Paladin laying the Law Down the Ranger acting on instinct, and Val abusing the Ring of Invisibility and Wand of Polymorph then scampering back to his guild with the new found magical goodies. The question is have we seen the last of Val’Vale??

The rest of the party now ventured on into the Swamps heading back towards Dunwater and the Alliance council.

As the party traveled carefully through the Swamps they encountered a group of fellow adventurers searching for a band of Bullywugs that had been raiding nearby human settlements. On meeting the party both groups agreed to join forces and bring word back to the Alliance of the recce done in the Sahuagin fortress then continue as a group to find the Bullywug camp/home.

As the party followed the main trail leading through the Swamps they approached the area where previously they had fought the Black Dragon, unfortunately its mother had not taken the news of her offspring’s demise so well and was swooping round the fog bound area looking for evidence of her sons killers. The party spotted the threat in time and made a stealthy escape off the trail towards a range of desolate hills to the northwest of the trail. Arriving cold, and scared the party found a small opening in the hillside where they could hide out for a while until the large beast gave up its search.

On entering the cave Moragg found a patterned wall at the back of the opening and investigated it, finding it was an entrance to an underground Tomb complex.

Believing it to be one of the Fabled Frodricks Underground Tombs the party pressed on, Froderick being a Elven Mage Thief who enjoyed playing games, his legacy was a series of Tomb complexes only one of which holds his fabled collection of wondrous items.

As the party entered the first room of the Dungeon they were surprised by magical messages which boomed ghost like disembodied face images from the doors and spoke the word “Choose another path” when each one was approached. 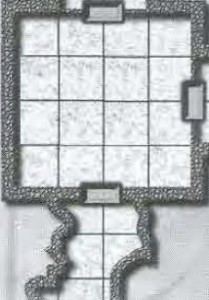 After entering the Tomb carefully the party found this to be unlike any delve they had undertaken so far, traps and tricks sat in wait, Slip the Thief was the first to fall foul of the Tomb as he fell down a pit and was transported back to the beginning. 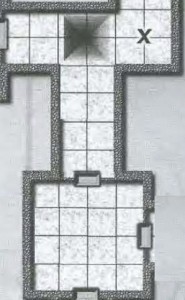 The party pressed on, found a room that was filled with various toys, Soldiers, princesses, wizards, stuffed bears etc and a bowl containing five bean shaped objects under a sign saying “Eat Me” After eating one the brave adventurer shrank which allowed them to move through a very small door into a very small corridor without size problems unfortunately the pills did not  shrink the weapons.

As they entered the small crawl space following on from the rest of the party eating a Pill, they were attacked by 4 mechanical Rats which click clacked their way into battle and included them sprayed the group with piping hot steam. After a tortuous, hot and steamy confrontation the rats were vanquished but not before the fighters realized the creatures had amazingly tough metal bones and limbs. The Rats absorbed a large amount of damage before their cogs and springs finally gave in! 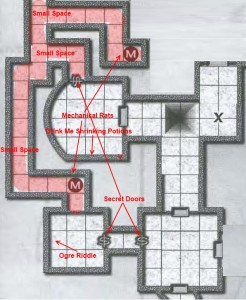 The party then entered another room with strange Gatehouse with 4 toy Ogres standing guard in front. The Ogres posed a riddle about which colours should be spoken first. The party worked out that the order was White, Pink, Green and Yellow and a blue Key was produced from the top of the Gatehouse Model. 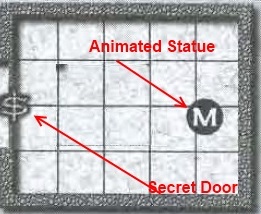 The Party moved back to the Entrance room and opened the door to the north , followed a corridor and finished up finding a warded door. The door had a sign saying to pass to pass this warded portal you must pass this way Mortal” when Slip tried to open it it teleported the whole party to a secret room guarded by a massive Statue of a Female Fighter clad in plate Armour wielding a large 2 handed sword. The party fought hard and eventually cracked the statues outer shell and it crumbled to dust leaving the group tired and lost. fortunately the DM had not cropped the image.

Session ended with the party battered bruised but excited for more adventure!