by Barry Fee
D&D, Role Playing
Comments are off 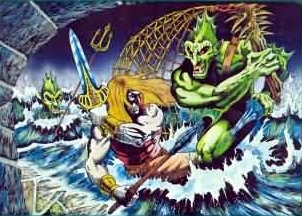 The session started with a fight for the party’s life, the Sahuagin having been alerted were now assaulting the upper floor of the fortress from their watery lair.

A Fight for the party’s life

The party put up a most impressive show against the Sahuagin arriving in force from the barracks on the second level. Sporting his new Magical Armour Jeramiah stood resplendent in the midst of the oncoming horde. With 3 swift strikes he felled 3 Sahuagin, his blade strokes finding the weakest points in the great creatures defences time and time again. Shrugging of their feeble attempts at bringing him down, dodging nets and ducking tridents Jeramiah stood as a beacon of hope to the party, who seeing Jeramiah  bathed in the glorious light of Pelor’s Grace pushed themselves on to greater and greater deeds. The ex prisoner now free Half Orc Morag snatched up a weapon and  felled three creatures in three blows. His great prowess as a fighter showing through his dishevelled exterior. The party noticed something in his eyes though, something worrying, only a fleeting glance of what creature now fights with the group.

As the party fought for its very life, the now completely mad Gnome Illusionist made is move and ran gibbering towards the exit. thankfully he didn’t light the oil he had casually slopped onto the dressed stone floor of the entrance to the room. The last words the party heard from him as he sped off was “goodbye fools” was his comment truly the ranting of a mad Gnome or has he seen the fateful future of the party and made his escape early, Mad or not Mad? only time and the tales of wanderings minstrels will truly tell if the little chap was right to leave!

Friends where you least expect them! 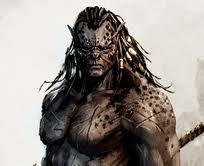 With the loss of the Mad Gnome the party were only to happy to accept the friendship of a massive Half Orc Morag, following the fight with the Sahuagin and while the lower level of the Fortress was being investigated Morag pleaded for the party to let him seek his revenge on the evil sea creatures.

With revenge in his eyes and a scary snarl to his smile, Morag gruffly took up arms with the alliance.

What was behind Morag’s aggression? what made him the half man he is today? will the party regret his inclusion in the days or hours to come?

After taking an eight hour rest in the secret room the party gathered its strength, re learned spells and prepared for the next day. Throughout the night noise of patrols in the vicinity of the room could be heard but none of them entered. Val only needing a short rest, continued to investigate the rest of the lower Level while invisible, and had a minor incident when four Sahuagin in a massive dining hall noticed the swirling movements of the water created by his body. They gave a sort of half hearted chase, but confusion and some amount of luck allowed Val to escape unharmed. While Val was in the dining hall he couldn’t help but notice both the size and layout of the room, as it seemed fit for well over 200 Sahuagin, should they all decide to dine at the same time.

After Val lost the Sahuagin from the dining hall he headed north only to be presented with a choice, a stone stairwell descended to the depths below appeared out of the dark, menacingly descending away deeper and deeper into the dark cold waters of the fortress. Considering his investigation of the second floor incomplete he noted the location of the stairs and moved on arriving at an ornately decorated room which he decided to avoid, again deciding to investigate more before he examined individual rooms in greater detail. One room that did give him cause to be concerned was a large room roughly central to the level that had some form of large creature in it? Maybe a Large sahuagin or maybe worse???

While Val continued to investigate north and east of the second level Grimm the dwarf sporting a magical underwater helmet and ring of free action, moved slowly away from the upper levels into the dark both south and west. While moving west Grimm encountered a Chieftain of the tribe, and after a short but bloody fight he bested the large creature and managed to spot a loose marbled floor tile. After dislodging it he found a key to a very large but locked coffer in the Chieftains room. On opening it its contents brought a grin to the stern faced fighter. Within the large stone contained he found thousands and hundreds of gold pieces worth of Gems, Jewellery and items of value. He quickly gathered up what he thought worthy and moved on.

After travelling down dark, cold and empty corridors Val eventually came south to a room that housed large numbers of Sahuagin who were interacting with smaller, infant like creatures in what appeared to be parental or family groups. The room itself was massive and he decided not to push to far in, unfortunately his movements did create some eddying of the water which did not go unnoticed by 1 group of creatures who quickly decided to investigate. Again though Val’s steely nerve held and he managed to slip quietly away from the inquisitive group without incident.

After considering the ease in which the party dealt with the large number of Sahuagin that attacked them the day before, the group who were not below water decided to make so much noise any patrols sent to check the upper levels would be attracted by the din! How this falls within the remit of the Party’s plan is a mystery but based on the idea that a distraction above water will reduce the numbers below the group proceeded to bang and crash its way to a confrontation. It took approximately 3 hours for the group to see any enemy but once it had the ten Sahuagin arriving to deal with the noise quickly proved a handful for the reduced in size group. The Cleric was very effectively dealt with, he was netted by three Sahuagin and leapt on. his life seems to now be over as slash after slash of daggers cut deeply into his medium armour. Jeramiah held his own but numbers could tell as the fight continues. Morag, felled a number of creatures but again he is but one Half Orc in a sea of trouble. The Lizardmen allies have now started to fall one by one and Slip Digby is looking for an escape route. The question on everyone’s lips is will the main group Survive?? 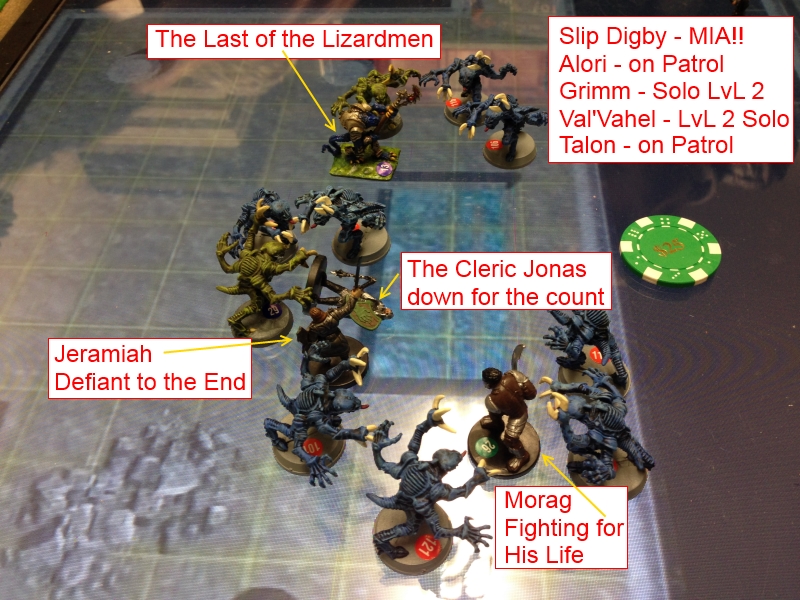 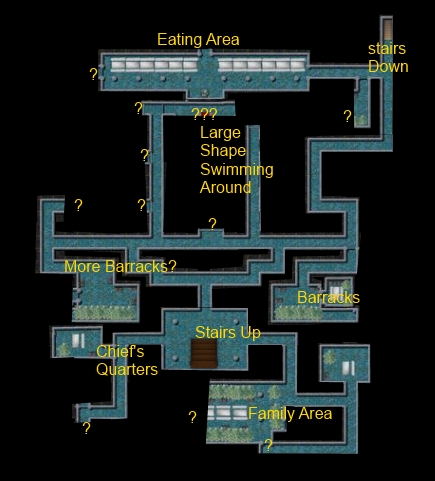