After spending a week recovering from the investigation of the Lizardman lair the party decided to tie up some loose ends by getting their loot identified, stocking up potions, and planning the next part of the quest. The party was also introduced to a friend of Quinn another Elf named Alari. This immense Elf explained his family had been killed and Quinn was the last friend he knew to be still alive. He had travelled to Saltmarsh in the small hope Quinn had not moved on, and was thankful the party agreed to allow him to join as he had no way of returning back to his now destroyed forest home.

After Quinns failed attempt to identify the mysterious Gems found in the Lizardman temple the party showed them to Yvette at the church, this led to a disturbing series of events the as once the gems were uncovered the lights in the temple dimmed and the weather outside took on an evil presance. Yvette demanded the gems never be brought into her church again as they were connected in some way to the Evil Diety Tharizdun! She advised the party that more details may be available from the Book Keeper / Sage.

Visiting him the group were told that his abilities were not sufficient to scry the items and pointed the party in the direction of Angriz the Sorcerer, a friend of Aurelius who lives in a fabulous tower near Gradsul

The Wand Figore Foechuckle found weeks ago on the Sea Ghost was finally identified as a “Wand of Magic Detection”. The three mysterious stones found by Quinn were identified as fabled Ioun Stones, these magical rocks, once released orbit the owners head and confer advantages. One adding Dexterity, one adding Wisdom, and one sustaining the user without air.

Quite a lot of money was spent on healing potions as the party lost its Cleric to the local Church of Pelor.

The groups other Paladin also had to leave the group as his order required him to quest fore the holy seal of st vincent which was thought to be located in the Hoole marshes. After the recent Bullywug fight and other attacks originating from the Marshes along with the pressing nature of the current threat from the new Enemy the Sahuagin the rest of the group refused to accompany him.

Luckily Jeremia Hopwood returned from his duty’s as a Paladin of Pelor and was able to bring some semblance of order to what was becoming a disordered rabble. On his arrival at the town he was met by the prioress Yvette who passed on the emblem of Pelor requested by the now departed Paladin months ago. The golden Sunburst Amulet of Protection, created from the foul image of a golden Orc God Bahgtru now bore Pelors sun design and personal blessing. He is now able to cast Protection from evil three times a day. Amulet of Protection from Evil in the Image of Pelor

Worryingly Figore Foechuckle has started to show signs of madness since the pressures of combat seem to take their toll on him. His incessant babble has brought into focus a disturbing trend towards throwing darts at friendly characters. Threats have been made on his life should the trend continue. His time in Saltmarsh allowed him to purchase a book on the language of the Sahuagin which he is busily reading.

Grimm considered his spiritual self in the time they party rested, he purchased a weapon of good quality and with the permission of the Smith and the help of Igor the assistant (who does all the work anyway) he sacrificed the weapon to Clangeddin Silverbeard. As the Axe slowly melted into the white hot embers of the forge, Grimm, eyes blurry with the heat of the ceremony, said words of worship over the axes destruction, and with the huffing noise of the leather bellows in his ears Grimm knelt in quiet prayer ending the formal ceremony.

Grimm was also passed a helmet by the party that offered some assistance in watery locations as it was identified as a Helmet of Underwater action. Helmet of Underwater action, bulky but useful in aquatic settings

It is feared by the party that there could be sea or Lakes involved or maybe even marshes, so the helmet was a great find and to fully prepare a large potion of  water breathing was purchased as well.

Suitably rested and ready to rid the Lizardmen of the Croc threat the party set off for the location of its nest, as indicated by the chief. After spending two to three wet hours slugging through the rain swept Marsh tusseling with the indigenous leech life of the area back to the Lizardmens lair the party were halted by a large section of flooded marsh. As Grimm carefully waded over to test the depth of the flooding he was attacked by three 10ft Crocs. A quick battle ensued and left everyone fearful of the larger version to come

The party sodden after the tussle with the Crocs found their way to the lair of the giant beast and created a plan to distract the beast with an illusionary Lizardman while Quinn tossed rocks at the foot of the image to attract the attention of the great beast. 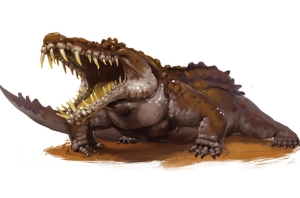 The plan worked perfectly and the immense crock burst from the dark pool only to spot Quinn at the last minute. Realising his Lizardman lunch was not real it elected to chase the real food back to the group. The Giant Croc smashed into the party tail swiping, water crashing, jaws snapping, the party met the creature with equal gusto and Alari with his great strength sliced and diced into the creatures scaly hide. The creature managed to get a few hits into the group and avoid a sleep spell before it quickly succumbed to a barrage of attacks from all sides. Just as the party gathered their senses a loud crash could be heard from the back of the clearing as two large trees parted to reveal the coiled body and massive head of a Pan Lung or Water Dragon. With its bodyguard vanquished the Dragon slithered into the fight to defend its lair from the invading humans. With a spout of Water Fire the creature assaulted the group. Again Alari took the lead and landed blow after blow on the coiled horror, Grim and Jeramiah assisted in the fight against the creature with sword swings and Axe attacks to the Dragons long scaly body. Finally the creature was vanquished and its lair looted.

The lair of the creature hidden as it was under a bed of logs, bullrushed and Marsh grass held a trove of valuable treasure which will need to be fully appraised for its true value. Following multiple uses of the Wand of Magic detection the magnificent haul included:

With the quest to kill the Lizardmen’s tormentor over the group decided to head on back to the Dun and speak with the Chief and the other representatives of the anti Sahuagin alliance.

About the Author
I was born in 1965, I have been a member of the Club since 1982. I play mainly boardgames and Role Playing games but I also love Ancient and Medieval games. I started gaming when I was old enough to stand an Airfix Soldier up on my parents carpet. I moved up to Model Making kits and eventually found Donald Featherstone wargame rules at the local library, since then my life has always included gaming, be it online or social face to face gaming at the club.
Social Share
2 Comments