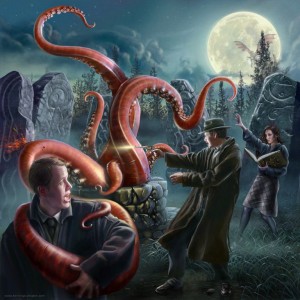 A Death, Some Cultists and lots of clues…

Returning back to the Astoria through the snowy winter’s day the party reconvened at dinner that evening. They mulled through the information that Jonah Kensington had handed over, Jackson’s sightings at the Geographical Soceity and Murray’s findings at the Telegraph office. Tired and weary, each sank back into their chairs, legs aching from the walking and minds racing with possibilities – could the Carlyle Expedition be truly alive ?

Later that evening McTavish received a telephone call – Jonah Kensington in a high state of agitation and embarrassment. Jackson had apparantly contacted him  earlier in the day requesting that the party meet him the Chelsea Hotel, room 410, at 8pm that very evening – it was now 8.15pm ! Everyone hurriedly collected some belongings – hats, scarves, coats and an armory of weaponry.

Two cabs were hailed and fortunately the streets of Manhattan were not too clogged and the Chelsea Hotel was made in a matter of minutes. Sensing , perhaps, a trap it was decided that Murray wait in the lobby where he diligently scanned around for anyone of suspicion. Cpt. Howard and Miss Rivers took the lift to the 4th floor whilst McTavish, Kane and Du’Thame wheezed and gasped their way up 4 flights of stairs.

The plush carpeted corridor of the 4th floor muffled footsteps adequately  and after some deliberation the party crept up to the door of room 410. Nothing could be heard behind the rich, thick oak that stood stolidly before them and for a moment everyone took stock and applauded the Keeper’s skill in alliteration. Or was it onomatopoeia ? Nobody cared.

Du’Thame sensed a small draft waft under the door. Howard tried the handle. Locked. Kane jemmied the lock and quickly opened the egress (look it up yourselves). Not 3 feet into the room stood a surprised looking black man clad in what appeared to be a hooded robe and holding a bloody machette. A swift scan around  picked out 3 more similarly clad figures.

Gunfire erupted with a hail of fury from Kane, Howard and Du’Thame yet bizzarely , as deranged as the occupants seemed, they began to move towards the open window of the room. Du’Thame stepped across the threshold and his arc of vision widened to throw him up a gruesome sight towards his left – a large double bed containing a very expertly partially dismembered corpse. Blood soaked the sheets like a crimson tide and dripped  to the floor like the best Hammer House of Horror close-up shot should.

Kane pumped a fatal shot into one opponent and Howard delivered a well aimed shot to the head of a second. McTavish barged into the room eager to help his friends and as his eyes fell to the scene on the bed he began to teeter on the edge of insanity. Made of sterner stuff he brushed aside the temptation to cry like a school-girl and waded into the fray.

Downstairs, Murray sensed gunfire and quickly made his way upstairs fearing for his new-found-friends’ safety. After what seemed like hours but was in fact minutes, it was all over. The hooded fiends were dispatched , the last on the second floor fire escape where Du’Thame spotted a waiting sedan.

The mutilated corpse was Jackson Elias and Miss Rivers bravely identified a strange symbol carved into his forehead. After a thorough search of the room and cadavers some interesting items were discovered; a matchbook from Shanghai, two business cards – one from the Penhew Foundation in London, the other an importer called Emerson in New York, a letter about a book enquiry from Harvard University, a blurred photograph of a yacht possibly in china, and a letter written to Roger Carlyle from a trader in Egypt penned some years ago.

After some discussion Howard wisely convinced the party to call the police rather than flee the scene and soon some uniformed officers arrived at the hotel alongside a Lt. Martin Poole. Suspicion was averted away from the party but they were ordered to report to the 3rd Precinct at noon the following day for further questioning. Importantly it was learned from Poole that similar murders of this style have been occuring for some years and a cult is rumoured to operate in Harlem. Less importantly but more amusingly was the reaction of one of his officers upon viewing Jackson’s corpse. Mental he went. Right mental…

About the Author
Member of the club since 2011. Started roleplaying and gaming back in 1981 although I can trace a love of boardgaming back to my early childhood. My favourite rpg's are Cthulhu, D&D, Runequest and Traveller. Favourite boardgames (at the moment) are Eldritch Horror, Battlestar Galactica and Twilight Struggle. My boardgame collection borders on 120 games (all rammed in the loft). I have been married to my loveley wife, Sandra, since 1991 and luckily she understands my hobby (or thinks I am clinically insane).
Social Share
2 Comments