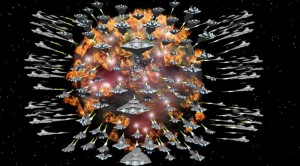 The Star Wars: X-Wing Miniatures Game has a straight forward set of rules, but the simplicity of the game hides a complexity of game-play. Following on from my review of the game, I thought that a brief explanation of the basic strategies and tactics inherent in the game might help those new to X-Wing. This will be a multi-part article, first looking at the tactics useful for playing the game, followed by a look at use of actions, and, finally, squadron design with an overview of the ships, pilots and upgrades available to you. If you are experienced with X-Wing, please add comments, or start a discussion – as they say: “Every Little Helps”

Style of play
The game lends itself to many different styles of play. The principle ones are the straight forward aggressive attacker, the defender who lures his enemy onto his guns, the sneaky trap layer who outmanoeuvres his enemy to gain the advantage, or the thinker who designs an advantage into his squadron, usually at the cost of incorporating a significant weakness.

Placement of the Asteroid field
Asteroids severely limit manoeuvres, especially for the large-based ships. Place asteroids to channel the enemy ships onto your guns, or to keep them away from your weaknesses.
If your opponent has a large based ship, try grouping three or more asteroids close together in a triangle (remember they must be one range unit apart). With a large base it is very difficult to judge manoeuvres to miss the asteroids and many players will avoid that part of the playing area. 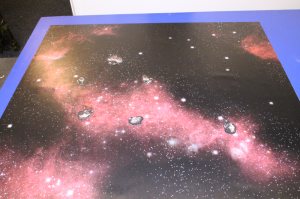 Squadron deployment
Firstly, you have to get your ships onto the playing area. Deployment sounds simple, but the game can be lost here if you are not careful.
One of the obvious things to consider is how you can make use of the spaces between asteroids – they can restrict manoeuvring, but sometimes can help one player whilst hindering the other. Plan to make full use of the layout of the asteroids.

Other issues to think about are:
1. Do you need to keep the ships close together?
You may have a ship that confers an advantage to others in the squadron; be aware of the range limitations and make sure you get maximum benefit. The downside is that a close-flying squadron may make manoeuvres difficult, resulting in lots of collisions. It may also suffer from assault missiles that damage all ships up to range 1 from the target. Also, the enemy may find it possible to keep out of your fire arcs and outflank you
2. What are the consequences of keeping the ships apart?
You will make it harder for the enemy to outflank you. If you place your fast-moving ships on one side, you can easily redeploy to the other, play a refused flank and gain a temporary outnumbering advantage. You will also have flexibility in how you choose to attack the enemy ships.
Disadvantages are that your ships may not be able to confer advantages to each other, and you may find that your opponent manages to isolate a small group of your ships and wipe them out

Obviously from the above advantages and limitations, there is no ‘perfect’ deployment: you have to plan the deployment to suit your tactics and the opposing player’s deployment.

First Move
The first move can make a major difference to the rest of the game, so plan carefully!
The safe option is to make a small move of one or two Movement Units (MU) so that you know you should be out of range of the enemy ships after they have moved. You can then see whether your opponent has done any unusual moves and be ready to react to them from move 2 onwards. 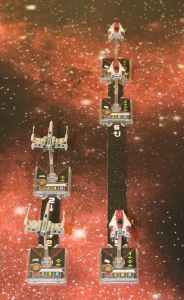 Because the safe option is to make a small move, you may be able to surprise your opponent by rushing at full speed towards him. You may be able to fire at an enemy ship and do some damage before the real dogfight starts. Of course, the risk is that you place one or more of your ships in a position that they can be damaged – it’s your choice.
The ships with a straight movement of 5 MU, can sometimes be in range of an unwary opponent on the first move, especially if they use the boost  action

Also, be careful of the large based ships – it is surprising how much table they cover, even with a short move.

Once the ships are close enough to shoot at each other, it’s time to start dogfighting. At first, it will seem impossible – you have to plan to shoot at an enemy that could go in any direction; you have to plan to avoid being shot by enemy ships that could come from any direction; you have to make decisions about which actions to do before you know what the enemy will be doing. On top of that, you will be avoiding collisions with other ships and asteroids.
You might want to practise moving your ships on a table, before you get as far as a real game (particularly if your ships are going to be flying close to each other)
When you get into a dogfight, if you are struggling at first, then aim to get one thing right – probably the most useful (and most fun) is to aim to get shots off every turn. Alternatively, you could try to fly without collisions, avoid taking damage by keeping out of the fire arcs of the enemy, or even plan to place your ships so that enemy ships crash into them. As you get the hang of the game, you will get better at all of these.

Another thing is to recognise the style of play of your opponent: is he aggressive or cautious? Is he likely to try to get shots off, or try to avoid getting shot?
A very effective strategy is to use a low pilot skill ship to disrupt the enemy plans: just move it into the area where you expect the enemy ships to finish. If you are successful in causing a collision, then you gain two advantages: first the colliding ship cannot do an action and secondly it can’t fire at the ship it bumped into. How cool is that? 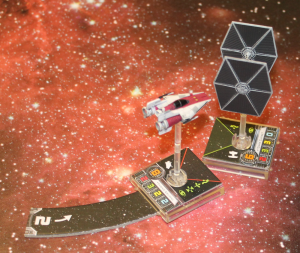 Eventually, you will be able to work out how to do all of these things every turn.

One final note – the Kioigran turn, where you turn 180 degrees should be used, but used sparingly as the ship receives a Stress Token for the privilege. This means that you lose the action following the manoeuvre which can make your dogfighting less effective.

When it comes to ‘shooting’ (i.e. rolling the Red dice), you have to get more hits than your opponent gets evades with the Green dice. Have a look at a Red dice: you will see that it has eight sides and that there are three sides with icons (Hits), one side with the crit icon (Critical Hit), two sides with icon (Focus) and two blank sides (Misses). You therefore have four chances in eight of getting some type of hit (normal or critical) when you roll each of the dice.

Now have a look at the Green dice: you will see that it also has eight sides and that there are three sides with Miss icons (evades), two sides with possible miss icon (Focus) and three blank sides (Misses). You therefore have three chances in eight of getting an evade result when you roll the dice.

If you roll equal numbers of Red and Green Dice, on average there will be slightly more hits (4 out of 8) compared with the evade results (3 out of 8). At this rate, your game will take several hours before all the ships on one side are destroyed

Obviously, successful shooting is the only way you will beat your opponent. So, what can we do to improve things?

Here are a few tips to get you going.

Tip 1: Shoot at a range 1 target in preference to a range 2 or 3 target with Primary Weapons.

It seems obvious, but aim to use a weapon that will give you more attack dice. Primary weapons normally have 2 or 3 attack dice. 3 is better than 2, but remember that at range 1, primary weapons gain an extra dice and at range 3 the defender gains an extra defensive dice. Shoot at the nearest TIE Fighter to get more dice 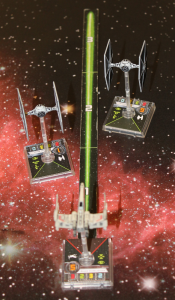 Tip 3: aim to concentrate your shots on a single target if possible
Unless you get lucky, even a maxed-out shot will generally only do a maximum of 1 or 2 damage, so it will usually take several shots to destroy a ship. If you spread your shots among several ships, it will take time before you destroy anything, and all the time they will be shooting back. Two or three good shots can destroy a small ship. 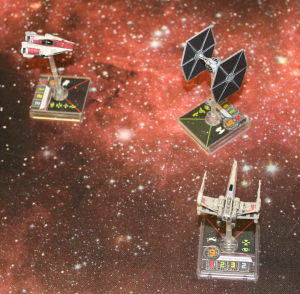 Tip 4: ignore Tips 1, 2 and 3 if there is a better shot!
There will always be times when these rules should be overridden. For example, if there is an enemy ship at long range with only 1 hull point remaining, it will probably be a better option to try to destroy it than shooting at a range 1 target with little or no damage. 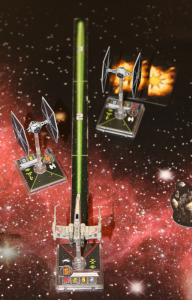 Shoot at the range 2 ship which has 1 Hullpoint left

Tip 5: Make full use of anything that can increase the number of hits/damage you achieve

Some Pilots have a bonus such as an extra dice to shooting (e.g. Mauler Mithel); others can reduce the number of defensive dice that can be used (e.g. Wedge Antilles). Some other Pilots confer an advantage to the shooting of other nearby ships (e.g. Howlrunner) – make sure you are close enough to benefit from the advantage 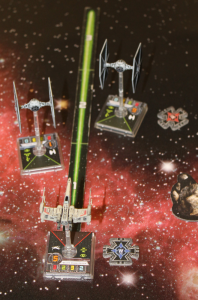 Certain actions can increase the number of hits you achieve: I’m talking here about Target Locks and Focus. Target Lock allows you to reroll dice, and Focus allows you to change “Eye” (Focus) results to hits. On average, 3 Attack Dice vs 3 Defensive Dice will result in little damage, however by use of Target Locks or Focus, the Attack dice will, on average, result in damage, as other than the Focus or evade action, there is little that the defender can do to reduce the number of hits that he takes!

If you can gain an advantage by additional action from pilots such as Lando Calrissan, try to use these to make sure you have both Target Lock AND Focus!!!! 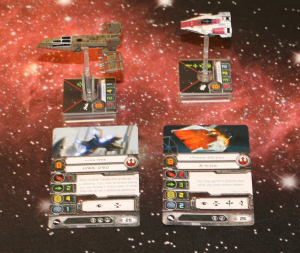 Make use of Pilot Abilities to improve your shooting

About the Author
I started playing Dungeons and dragons in the late 1970's and continued well into the 80's until I got married and started a family Eventually I got back into the hobby and have never looked back, playing an eclectic mix of SciFi, Fantasy, SteamPunk and Historical wargames
Social Share
5 Comments